I am currently in the process of R&D for a project where I will need to create Multiplayer worlds which are roughly 100x100 KM in size. This is not specifically a mainstream gaming project, so let’s leave it at that

I have noticed that maximum grid size the Unreal Grid shows up for is around 20x20 KM; I have myself successfully built and loaded a 16x16 KM terrain in UE4 using the World Composition option. Which begs the following questions:

I have posted this on the AnswerHub, but have had no luck in getting any answers

Landscape architect is a procedural landscape generator. It lets you design and build landscapes within the UE4 editor workflow and automatically takes care of setting up the materials, foliage, world composition etc ... 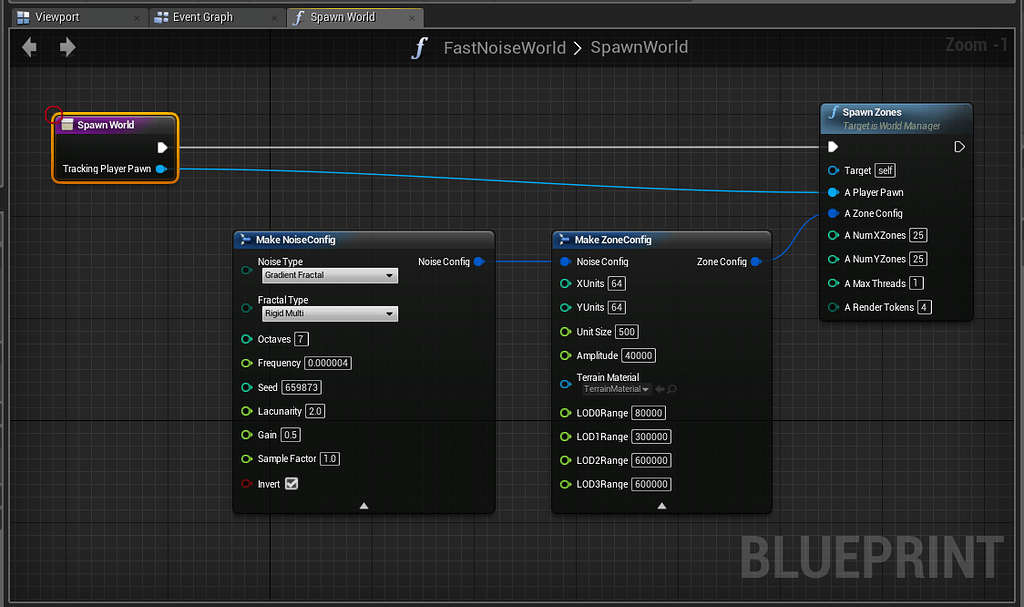 I’ve been messing around with the ProceduralMeshComponent for a while, and after many revisions I’ve got a version that’s sort of ready for other people to see. This is all built with community assets, thanks go out to : @koderz for his...

It’s your multiplayer requirement that’s probably going to cause you the most grief, particularly with collision authentication although you should check out this thread:

Merged. Hello everyone. Probably everyone knows about floating point precision issues with big worlds in UE4. Sometimes some jitter (anims, camera) starts to appear only 2-4 km from origin (especially noticeable in first person games). Since UE4...

Procedural generation of terrain is not something that would really work out for me, unfortunately. The most I can say about this is that the client will want to give me a specific area’s topographic information, and I will have to respect that, no matter what. I am hoping this is not the case, but I have to account for it. So currently, I am assuming my workflow to be something like Generate tiles in World Machine -> Get tiles in Unreal -> Get artist(s) to work on each tile and hope and pray they line up without major inconsistencies.

I did think about the multiplayer jittering, but in my tests on a 16x16 terrain, there was no jittering issue (and I was running 4 players in multiplayer with 50 bots randomly running around). Of course, this being a 100x100, there will definitely be some issue. Cool thing is 4.15 supports multiplayer origin rebasing out of the box. Uncool thing is I have no clue how to use it :D.

Thanks for the links, I will definitely take a look at them and see how I can use them.

Right, so you’re going to want to use World Machine, make the tiles and use World Composition inside of UE4. If done correctly, there shouldn’t be any issues with the edges lining up and you should be good to go with level streaming. Just gonna take a lot of artists to work on maps of that size.

Edit: Just reread the OP and realized that you’ve done this process before, so not sure what you’re confused about. The workflow is sound, but ioFlow is correct about multiplayer origin shifting issues. There was a pull request for a multiplayer version of this that was merged in 4.14 but apparently it’s limited (at least that’s what it read like) that the feature was limited to 20km by 20km worlds, which is the max world size without using World Composition if I remember correctly. In that case, you may have to talk to your client about finding a custom solution as Epic used to advise users to do.