Extending the Editor - New Tab and Nodes in Blueprint?

I’ve looked around a lot but didn’t find a conclusive source for how to extend the editor in a meaningful way, most tutorials on the topic are vague and don’t cover the topics in enough detail and looking at similar examples so far haven’t borne much fruit (maybe due to my own inability to wrap my head around the system).

I have an Object that has a custom actor component on it with some data inside (specifically an array of things and other data that isn’t really relevant right now).

I would like to present that data visually as interconnected nodes (the data is already connected just want to bind it visually) rather than having it as details panel (or basically have both).

As a side note, all of this is already implemented in the project and working - i would just like to create a visual editor for it so that its easier for designers to work with rather than through the details windows.

So for example what would be the starting steps if you wanted to achieve something like this:

b) In this tab there would be data that is inside the component array presented in some manner (each object in the array is one node, and some of this nodes have links inbetween them.)

For simplicity you can think of it as a branching dialogue tree but that’s not really the only point - just would mainly like to learn how to customize the editor to help the designers (custom tabs, custom nodes based on pre-existing data or newly created ones.)

So if we simplify the question: 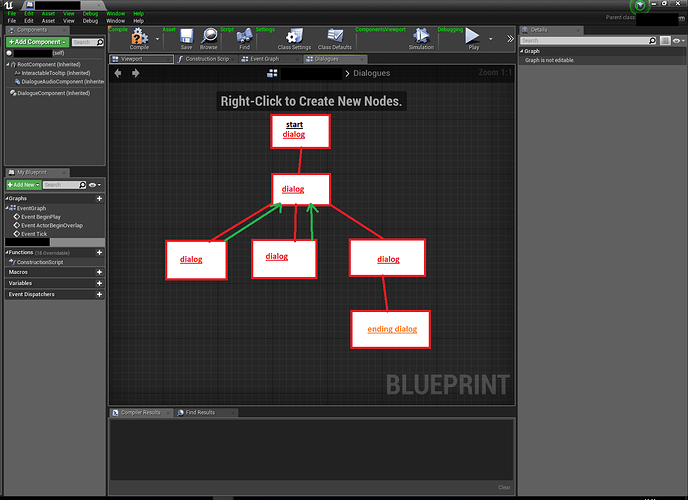 I don’t expect step to step guide, just a starting point or the hierarchy of how the things are built so that I can build it / test it gradually? What are the first objects I would create to? Would it be a plugin? Something else?

EDIT:
Added few images and clarified the explanation of what i’m trying to achieve.