Nice work Castle, and fast! Im having a hard time keeping up

Ill have a new version out later this week. Maybe Friday! or at the latest Sunday.

New version of Extended FPS Template is now up with additions and fixes! (1/4/2016)

Later this week huh? Haha! Picking it up now Castle! Thanks a million!

Later this week huh? Haha! Picking it up now Castle! Thanks a million!

I made progress a lot faster than I was expecting and also the number of bug fixes made me decide to go ahead and just release. 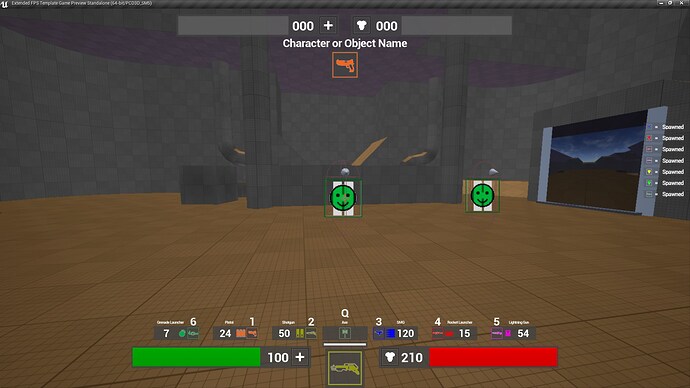 To be clear, this update is a downloadable release.

This version has a couple minor bugs at the moment that involve spawn points being visible when they shouldn’t be and sometimes the client can spawn in and the hud doesn’t update properly. I think that should be easily fixed in next version.

This version has completely reworked how ammo is setup on weapons. I added a reload key so weapons need to be reloaded and have limited magazine size. You can already see this template is becoming more generalized rather than just a Quake style shooter. Which is weird, because the map is Areowalk lol… 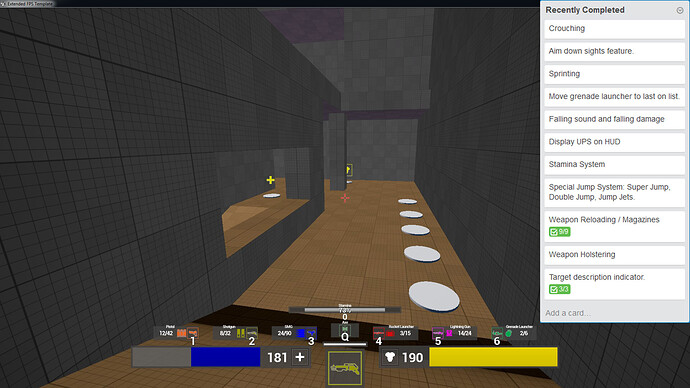 Sorry I have not been updating this thread lately but I will be releasing another version of the template very soon.

I am really surprised at what I have managed to do with my Extended FPS Template.

So I have an active cross hair that functions pretty closely to how the one in CS:GO works. Its set to be accurate at 10 meters from your target position. Weapons now kick and move your screen when you fire them. It feels pretty good right now too.

My plans for the next few releases will be to clean things up on some fronts. I want to make it so that structs are within the weapon blueprint so that you can modify the projectile and its damage on the weapon itself.

Currently right now you need to modify about 3 or 4 different objects to make a new weapon. Which is probably fine if you want guns to easily share ammo types but honestly Its not super useful vs the ease of having everything in one place.

The next big task is going to be an inventory system for looting objects. After that it will just be cleanup and game mode work. I want the Template to have a Doom 2 style coop/single player game mode as well as one 1 v 1 deathmatch game mode.

And that will be the extent of the extended FPS template before I begin making my own FPS using it as a base. Not sure how long it will take to get to this point, nor am I sure how much cleanup and polish I want to apply to the template. But I would absolutely love to see people make something with this.

[video]https://youtu.be/OAnn0ZTQMNQ[/video] Why are my video thumbnails just not working?

This version has many new features to it. I recommend watching the video through if you want to get a solid idea of what is going on in the Extended FPS template. There are a couple known issues that I do not discuss in the video.

One of the main ones right now is that I have not been able to figure out how to stop a specific log file error from creating fairly large log files. The error is really weird because it is complaining that the players inventory index array is out of bounds when the hud tries to examine what the player has. However I do multiple checks that SHOULD prevent this error from happening. It only happens in the log files and it causes massive spam. I need to fix this issue before the next release.

New version has been uploaded.

For the Developer Version go to my TSU or my The8App.
http://www.tsu.co/zZCastleZz/112584843
https://the8app.com/user/russellmeakim

Inventory and paperdoll system now in the works.

I am looking for advice on how I should change the way I am releasing and updating this project. I wish to find a more effective alternative to just using TSU. Which is really not a great place for releasing UE4 projects.

I have looked up Patreon and Gum road and both seem to work on a donations style system where I would be charging for this project. Which imho is not really what I want to do until the project is further along.

Can anyone offer advice on this as I don’t want to only use TSU anymore.

Next version of Extend FPS Template will have a loot system in place. (Next release will not require a TSU account.)

What you see in the picture is what would happen if you took #Quake and combined it with #Fallout4 . At least in spirit anyway. Yes I am actually carrying armor shards that I can consume to boost my armor. Yes its pretty strange. But there it is.

And yes the current plan right now will be to have these containers placed around the levels. I even plan to drop containers when you dispatch zombie men!

I have been working on the extended fps template feverishly for awhile now. It turns out that doing an inventory system is a pretty **** huge undertaking. Which is not really a surprise at all.

I know I haven’t been super active on here lately as I have been working so much between my job and my UE4 project. I don’t have much to really talk about outside of messing around with Black Desert and The Division when I take breaks from working non stop.

It turns out someone else has started an Extended FPS Template which is much more basic than what I have been doing. But with that said my project feels more like a game I am doing than some kind of template anymore. Its more like the facets of an indie game. A type of shared world FPS loot grinder quake game. With randomly generated levels this would probably feel like an FPS Diablo or something along those lines in practice. Though the template can be used for a standard quake style shooter with no issues.

So anyway, I am still not 100% sure when the next version will be ready to release. But I AM still working on it! I am getting very close on finishing the next version as well! The things left to do are:

The final thing on the list is interesting because I need a way to make it so stats get better as you level up in a way that does not scale poorly with weapon damage. Two people at level 10 with equal gear should be on the same equal footing as two people with equal level 100 gear.

So this is it for now, I am still working on this. I really seriously wish I had a medium I enjoy that did not take so much **** work to get it to a point where I can show what I have been doing. Indie game development SUCKS on this front. I often wish I was an artist so I can sculpt something in Z brush and get massive attention on social media.

Hey Im actually the one working on the other template, but dont let that discourage you! We are both working on two very different projects here and I definitely would like to see yours released, you’ve no doubt put more work into it than I have. Also the only tip I can give you for motivation is to take a break every once in a while. What I do is I work on several different projects and switch between them when I need a break from a specific task, but still want to make content.

Hey Im actually the one working on the other template, but dont let that discourage you! We are both working on two very different projects here and I definitely would like to see yours released, you’ve no doubt put more work into it than I have. Also the only tip I can give you for motivation is to take a break every once in a while. What I do is I work on several different projects and switch between them when I need a break from a specific task, but still want to make content.

I have been working on this one really hard because its a project I have wanted to play for a long time. Taking the game play of something like warframe/Destiny/Thedivision and slapping it into Quake has been a desire of mine for ages and this has been the first time I have been able to come so close to actually making something remotely resembling that idea. So I have been kind of pushing harder because of that.

As far as the project I feel like your project is better described as an extended fps template than mine.

I will probably change the name to first person loot grinder template or something more like that. (Hopefully come up with a better name lol) I am not really sure what I want to do other than actually get this to be in a playable state and build content for it while I make it available as a resource for others to learn and use.

I guess I am rambling but I am not sure yet what I want to do. I just know I want to see this come together and become something. Even if its just an example.

If its any reassurance, Id really like to see this released because even though Im making my own, I would still like to use yours for projects regarding a more arcadey like game.

If its any reassurance, Id really like to see this released because even though Im making my own, I would still like to use yours for projects regarding a more arcadey like game.

Next version is looking good for next weekend I think. I dont know what I am going to call it.

Major update on progress for the project http://www.tsu.co/zZCastleZz/117810511

I would post the image here but for some reason its not working.