When exporting models that make use of material instances, the exported fbx file will only show the parent-material instead of the actual materials.

e.g. I have a coffee maker that uses 6 Materials.
metal_brushed_v1, metal_chrome_v2, porcelane_black and glass_v6 share the same parent material ( BaseMat ). When exporting to any format (fbx,obj,…) the information about those different materials gets lost and only BaseMat is shown.

After editing the model and reimpoirting it to UE4, you are left with 3 Material slots instead of 6

which makes the 3d model quite useless. 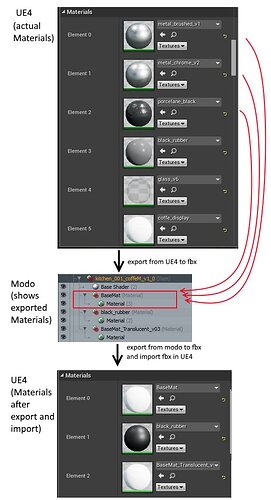 Is there some way to keep the material information when exporting? I already thought about converting the material instances to “real” materials, or using some kind of exporter plugin for UE4, but i haven’t found a solution yet. Using UE Version 4.11.2 and Blender instead of Modo doesn’t show any difference.

Since i use this Export-Edit-Import workflow quite often, it would be really useful to have a working solution. …especially because i need to change ~200 models that make heavy use of material instances.

So instead of exporting the model from UE4 after you have already imported it into the editor, is there a reason you are not just modifying the model in Modo and then just re-importing the mesh?

This would avoid the issue of having your material instances needing to be exported, and essentially doubling your workload. If you already have the model on your computer, and since you are not actually modifying the geometry within UE4, you can edit the model in an external program, re-import the changes, and they will be applied with the material instances.

With that said, we actually do not officially support Modo and I do not have the software on my computer to verify and test this workflow with that application. We do support and have documentation on the suggested FBX Static Mesh Pipeline using 3DS Max and Maya.

Hello Andrew, thanks for your answer.

However, i collected some scenes that i only have in Unreal without the ‘original’ 3d model files. Those are mostly bought unreal projects. Some of the contained models have tons of details and a far too high polygon count. Those are the ones i wish to edit.

FBX obviously does not support material instances, but i still was confused that the exported fbx (exported from UE4 to fbx…) only contained “BaseMat” instead of the actual material names - which seemed like a bug to me.

Since there seems to be no other way, i will start “fixing” the fbx that i get from UE4.

Yeah, the exporter from Unreal is more than likely the culprit for not adopting the material’s names which is actually expected. It is a very simple export process that only exports the mesh and the basics needed to import it into an external program.

Let me know if you have further comments or additional questions.

We’re experiencing the same issue with UE 4.10 and Maya 2016. Exporting FBX from UE4 and importing them into Maya for modification, and then exporting them back into Unreal loses some materials for whatever reason. Normal export of meshes from Maya into Unreal works fine.

The reason we are using this is because sometimes we don’t have the access to the original source of the models (person is unavailable, model is missing in repository, etc, there’s dozens of reason) and it’s really important for us to be able to properly export FBX from unreal.

Another usercase is when we need to adapt a model to some in-game geometry, where you can’t help but to export several models from within the level in order to get their correct layout and intersections with each other.

So unfortunately since you are working in an older version of the engine, we are not likely going to return and have your issue fixed. Your issues more than likely has changed or no longer occurs in the most recent full engine release, so I would test there to see if that is the case. The workflow you are experiencing issues with has changed/been improved.

Have same problem.
I exporting mesh from UE to Blender and back to UE using .FBX fromat.
Losing material sockets.
Also it will much better if socket save material names from any 3D editor app. Now it author applying. And it can cose some mistakes. Exporting from Maya with material name “Lamber1” and after reexporting using UE–>Blender–>UE with new name “mat_01” will add new socket to model in Unreal.