So I am creating a phone application for an Engineering application in UE4; the goal is to touch a drag car assembly (imported datasmith assembly from Siemens NX) and after touching it have the parts of the car explode outward and float in place, available for the user to grab and inspect, as well as have text programmed to each part to describe how it was manufactured and such. Then, when the user is done looking, all the parts would Ideally snap back in place with the press of a button. I got the sort of exploded view I wanted by using chaos to fracture the Siemens datasmith import, but i cannot get the parts to float in place, nor can I get them to snap back into their original location. A picture of the exploded view I created using Chaos is below:

I also want to do it with a turbine assembly (also Siemens NX).
Example Below:

Hello,
that is not a question that should go in the datasmith channel. You should ask that more in blueprint or physic.

I am not familiar on how you can control independent pieces coming out from the fracture tool. Using some kind of physic simulation such as a force field to keep parts separated will be unnecessary complex for what you want to do.

I would look more at a solution without physic simulation. A blueprint or sequence where you control position of each actors / fractured objects (if that is possible?). A linear interpolation between an initial transform of all your parts and their exploded transforms.

Sorry for putting it in the wrong category, is there anyway I can change that, or do I have to repost?

Also, I came up with a blueprint for the transform of each individual part: 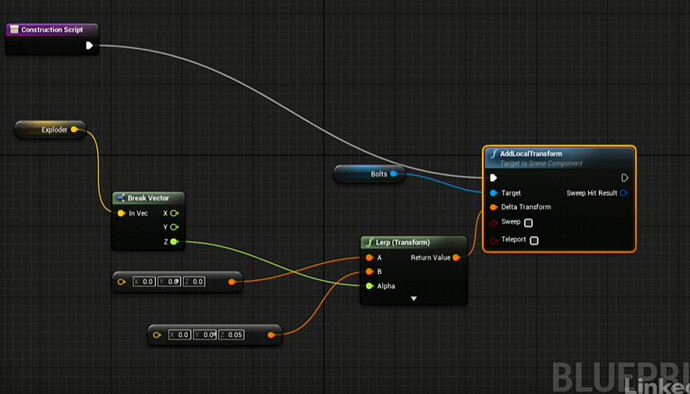 image907×518 78.4 KB
Unfortunately, there are about 2000 parts in the jet engine assembly (each turbine blade is its own part). So, would I have to replicate this 2000 times just for the turbine? It seems a little tedious but I guess it will have to work. There are many subassemblies in the jet engine too, so maybe I could just do a blueprint for each subassembly instead. So, this blueprint should cover the “exploded view”. Now I just need to figure out how to allow it so snap back.
whatsgoodman387 October 13, 2021, 8:28pm #5

Yes you can create a project from that template and look at how the explode behaviour has been implemented and copy part of it back into your project.

2000 parts is a big number you might need to merge some of them if the framerate is not good enough for your need.

Sounds good! Do you know how I would go about copying the exploded view plus its animation sequence into a different type of project?

I’d use WPO in the material and scale the distance from the centerline axis of the model.

You might want to get the object-pivot and from there figure out of you want to scale of from center, calculate a line/axis down the model and math your way from there.