I’m confused, here I call an Event Dispatcher (which is executed, I tested with the Debugger)
(Skill Actor)

grafik1026×334 87.5 KB
But it actually doesn’t seem to call the Event Dispatcher, as the corresponding Event doesn’t print the string and the listening Actors don’t respond either.
Here is the Event that doesn’t fire:
(Skill Actor)

You don’t really need to understand the logic behind these events, I just want to know what could cause the Event Dispatcher Call to not succeed even if it’s executed.

I think you might have it a bit muddled here.

You bind an event in all the listeners, and you call the dispatcher in the object they are all binding to.

You seem to be binding and calling in the same place.

The Event call in the same place is just for making extra sure that the called dispatcher is actually called, no functionality is bound there.

The place of the event dispatcher is a Skill Blueprint. A Skill Blueprint manages and places Damage Carriers (Projectiles, AoE’s etc.) in the world. If one of those damage carriers reports a hit (through it’s own dispatcher the skill listens to), the skill will itself report that a damage carrier that is managed by that skill has hit something. That event dispatcher can be listened to by some entity that used a skill, so it knows when that skill hit something.

The place where that dispatcher of the skill is listened to is inside a specialised damage carrier that itself uses skills, but that doesn’t really matter since the skill dispatcher doesn’t seem to be actually called (the test event doesn’t fire etc.) even though the node after the call executes perfectly and the debugger says it’s stepping onto the call.

Ok, my head just exploded, sounds like a complex system…

What I don’t understand, is why there’s no link here 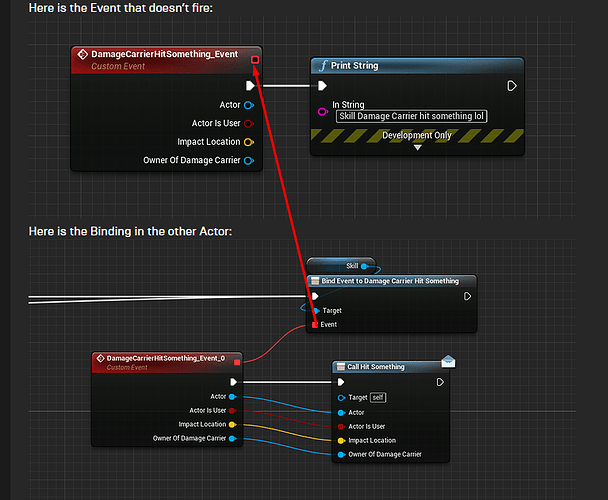 DamageCarrierHitSomething_Event_0 is not the same event.

Haha yes, I’m a software engineer working on a passion project with some buddies, we know what we do conceptually, but we are new to Unreal in that scale, and don’t know all best practices there - so, sorry for the complexity

That binding you showed sadly is not possible as the second screenshot you show is inside a different blueprint (sorry for the confusion, I think I need to further specify where what is)