Error with trying to gather text on the Localization Dashboard

I am running into an issue when trying to set up the localization for my game project. I am trying to gather the text, but everytime I do, it runs into an error and stops gathering. Compiling also runs into errors. Furthermore, I can only access the default English language. If I try to load up any other languages, I simply end up with a completely empty translation editor. I made sure to copy the gather and compile logs into txt files. [link text][1][link text][2] 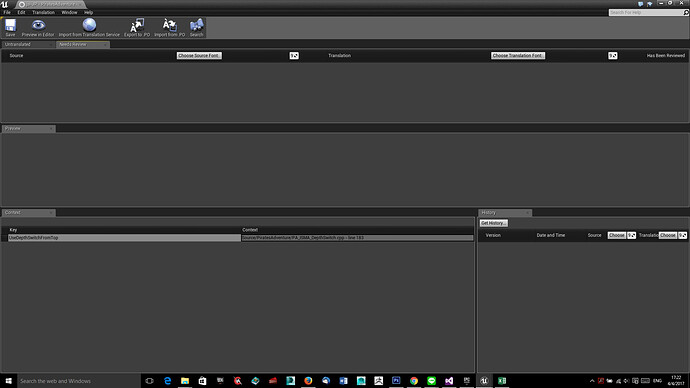 What are your Gather Text settings set to? Here is a screenshot of the settings I’m talking about. Please note that this is default and aren’t the ideal settings, it’s just an example to show what I’m referring to.

Here are the settings I used for the gather text thing. 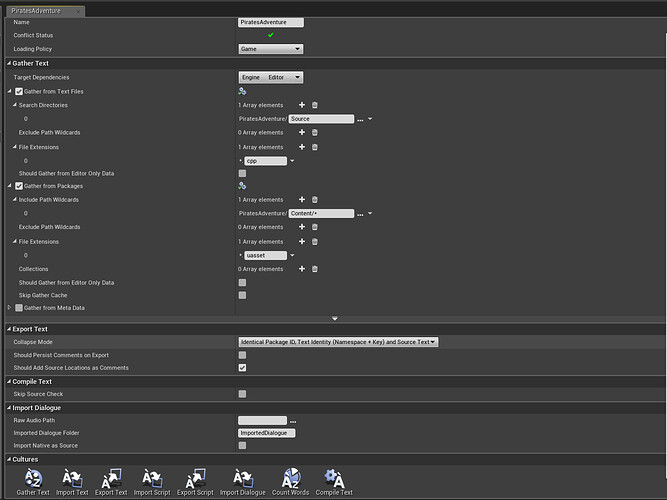 From looking at the logs provided in your original post, this seems to be an issue unrelated to the Localization Dashboard causing the Gather Text operation to fail due to an ensure being triggered. As you can see in the first log file, the following ensure is triggered twice:

When an ensure occurs, it doesn’t cause the editor to crash like an assert would but it does cause the entire process to freeze as it handles the ensure to avoid a crash, which is likely causing Gather Text to fail. Can you try fixing this issue and then seen if Gather Text will work correctly?

Fix it how exactly? I haven’t touched the scene component, or any of the source code for that matter and messing with things I have no experience with (ensureMsgf being one of them) is not exactly a recipe for success.

You would not need to edit source code to fix this issue.

Okay, that does sound like something I would do. I will check it out and get back to you once I have changed it.

So I went back and fixed all the AttachToComponents in the constructors (of which there were actually quite many), replacing them with SetupAttachment instead. Found and fixed another error that had to do with the physicsengine (apparently calling “set mass scale” in the constructor is also a big no), and with that out of the way I was finally able to gather/compile everything successfully.

So yeah, my issue has been solved. Thanks!