Hi,
i got a build error for android

Try unchecking the “Enable Gradle instead of Ant” checkbox in Project Settings. 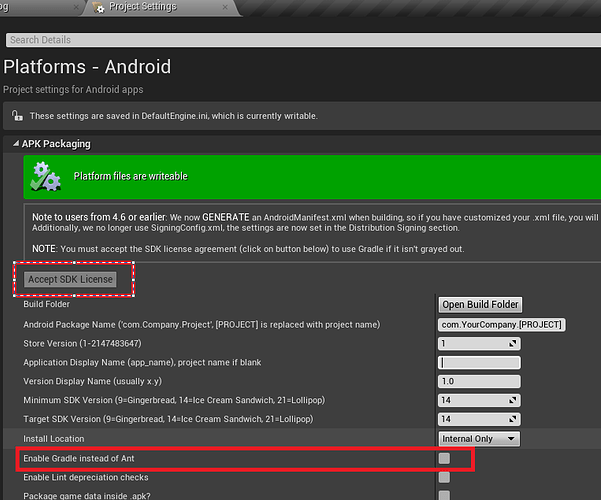 I’m having the same problem. Just updated UE to 4.21 and reinstalled the NVPACK to Codeworks 1R7 as given in the UE Engine Folder…
If you take a look at some lines above, it says (at least for me):

As enabling ANT instead of gradle gave me the same problem and all licences were already checked, I found an other solution: 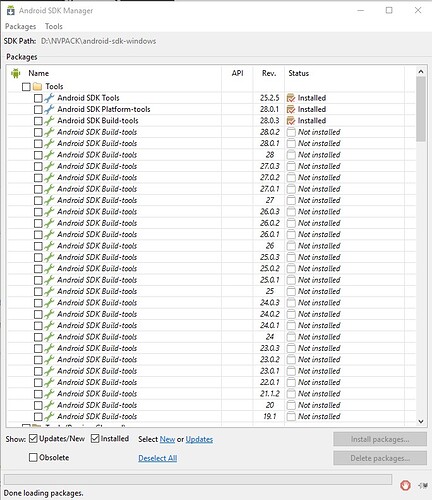 Now rebuild your Project and it should work without any errors!
Hope this is helpful

Thank you so much for sharing this! it fixed my problem.

how do you rebuild your project?

Not working for me. I update tools and platforms as well. But the same error.
ERROR: ERROR: cmd.exe failed with args

thx, it works for me

I am getting a similar in 4.24 but the Enable Gradle instead of Ant option is missing in my version

I removed all of the files for android studio and codeworks (which took some work for some reason) and started with this process from scratch, also installing JDK 15 fresh.

It worked. The “cmd.exe failed with args /c” failure is gone. I hope this works for you. I spent a week looking for the answer, and this 20 minute step-by-step setup solved the problem.

side note: my desktop system has not had this issue at all, and is still set up differently, for some reason the laptops would not work unless this exact setup is in place.

What eventually fixed it for me was deleting the Intermediate folder and then relaunching the project.

I had this problem, for me I had to increase the heap size.

its worked for me. thanks

Also got the “ERROR: cmd.exe failed with args /c” with version 4.26.1 and I fixed it by simply deleting the content of the ProjectName/Intermediate folder. xD

This is the simplest and the best solution for me
Thank you~!

I’ve fixed it by deleting the Intermediate/Anrdoid/arm7 (or gradle) folder, even sometimes deleting just the gradle.bat file.

For newest intallations use solution from