So, I’m not sure if this is just a graphical problem (I know the EQS system is still experimental) with the way the pawn shows all of your points, but for the EQS generate item on circle option, the circle seems to be cut off if there’s some sort of obstacle in the way. For example 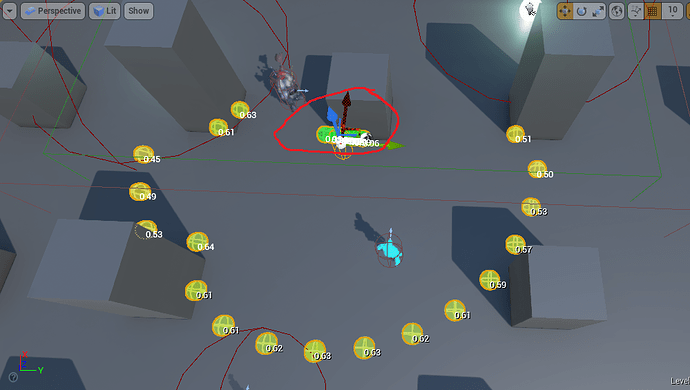 Notice how all of the generated items are bunched near the edge of the cube since the cube is in the way. The radius of the circle is more than large enough that those points could easily be generated BEHIND the cube, which is what I would like it to do. Is this just a limitation of the system currently? Considering that it asks for the radius of the circle, you would assume that it would first check the navmesh at the edge of the radius to see if there was an obstacle before moving inwards.

So, I just tried removing the navmesh just to see if that was indeed the issue, and at least visually it does seem to be. Obviously, that’s rather trivial since without a navmesh the items just generate on the circle regardless of collision or navigation, but it is odd that the navmesh causes this particular issue, since it isn’t as if the area behind the cube isn’t ALSO covered by the navmesh, so you’d think that it’d still be able to find it.