I accidentally set a databinding named param for the max distance on a pathing grid with the same name as another param I had for a distance test.
The pathing grid param failed to bind and crashed the test when generating items as the MaxDistance was 0.

I’ve also now ran into issues where the named param bindings are somehow not being recognized/serialized. I tried making new bindings on the original query and a new query with multiple params for the distance test and pathing grid.

AddNamedValuesFromObject was not returning the TypeDesc I expected when using the EQSTestingPawn or the run behavior task.

I’ve used params on other queries with past builds.

I’m running a customized promoted from about a month ago.

Thank you for the report, I am looking into this issue, but I have a few questions. Can you tell me which version of the editor you are using when this occurs? Are you coding any of this in C++ or purely through the editor? What did you name the parameters (I have seen some errors involving bad names and would like to compare)? Also, any screenshots of your EQS and the settings may help.

I’m coding some in C++, but this particular query is all Epic code/data except for my context which is pretty simple. As said in the first post I’m running a custom editor build based upon a promoted build from the middle of January.

First problem: if the databinding fails on a PathingGrid Path generator MaxDistance, it breaks due to the PathDistanceValue being 0. The Ensure within FPImplRecastNavMesh::GetPolysWithinPathingDistance fails.

Also with that same query or other queries if I add/remove more query params the EQS testing pawn, Run EQS query task do not recognize the params. The AddNamedValuesFrom in EnvQuery.cpp is failing to find them. I’m guessing the raw propertyvalue data is incorrect. 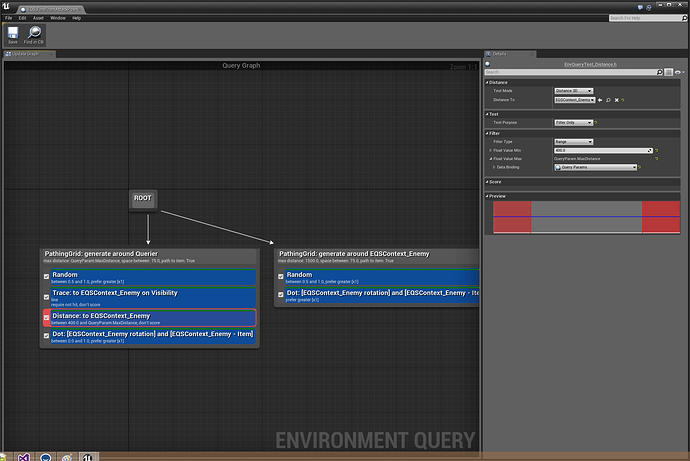 Hey, sorry for the delay in response. I was looking into this, but I can’t seem to reproduce it in 4.6.1. Here is a screenshot of my result; can you tell me if it looks like I am doing something differently or if I’ve missed something.

This may be related, as the promoted builds are tested once and some bugs will slip through. Can you tell me the version number you are on? It’s located in the Help>About Unreal Editor menu. Are you able to reproduce this in a finished build, like 4.6.1?

If I can get time I’ll try to get a clean finished build and make a similar query.

I’m afraid sticking with release builds isn’t acceptable for my team’s workflow.
For now I have no issues working around it. We’re finishing up our latest integration from promoted tomorrow and I’ll check if the issue still persists.

I see what you mean that I am using different generator types and slightly different names. I am now working with a PathingGrid generator and have the same two query params set to max distance. However, I am working in the 4.7 launcher version and our main internal build.

I have looked into the version you mention and it is an untested build that has not yet gone trough approval. I would suggest staying on the released builds. At the very least it does not seem to be a problem in our internal build, so it should be resolved in a future release of the engine.

For now are you able to work around the bug? If not, I will be happy to help you with a work around, otherwise, you may want to wait for the next approved build to be released.