Thanks for the feedback. Please watch for a Launcher update around January which will focus on CPU/Memory improvements. Hopefully you’ll see less impact afterwards.

Will this update fix the GPU temperature spikes as well? This is more worrying to me than CPU/memory usage for obvious reasons.

I would like to add a screenshot that I just took: 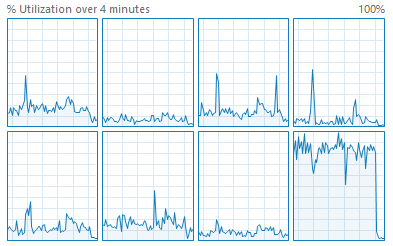 I had the launcher running all night, and the fact that one of my cores was at around 85% all night is honestly a bit worrying. In the picture, you can see my 8th core usage goes down towards the end, that is once I closed the launcher.

I have an i7 950 3Ghz and 24GB of DDR3 and I have seen the launcher use up to 40% CPU and anywere from a few hundred to almost 2GB of RAM which is kind of nuts…never use to do that.

The RAM usage on my rig seems to be OK, just around 200MB. Funny thing though is that the CPU utilization changes depending on what tab is open.

While the tabs marketplace and community only draw ~3%.

Just a note that the Launcher Update I mentioned previously has been delayed and hasn’t happened yet. We expect the CPU improvements to occur this month (February).

Please fix this ASAP as i too encounters the same high amount of CPU and RAM usage which is basically the launcher is a clipped browser. Unless there is something else inside the launcher

Please fix this ASAP as i too encounters the same high amount of CPU and RAM usage which is basically the launcher is a clipped browser. Unless there is something else inside the launcher

Have you updated your launcher? Because there was an update 1-2 days ago it seems. The CPU utilization went from 20-30% down to ~8% on my rig on the tabs Learn and Library.

Yes, Launcher version 2.9 was released last week, and it did include some Memory and CPU improvements. I hope it is having a positive impact. Full Release notes for the Launcher 2.9 release are here: Latest Launcher Release Notes - Announcements and Releases - Unreal Engine Forums

Yes , I’ve had this issue as well but something that helped a bit was closing the launcher when the editor is open ( like minimize it to tray )

I’m on launcher Version 2.9.0.0 and it has just recently(Within 2 days) started using very high amounts of my CPU just idling in the Launcher. This has not happened before and I have no idea why it is doing it now. I woke up this morning after rendering some Tiled terrain files to see a message that said “Your computer is running low on memory” which is very weird because I have 24Gb of usable ram and never thought to be running out any time soon. Need some debugging? 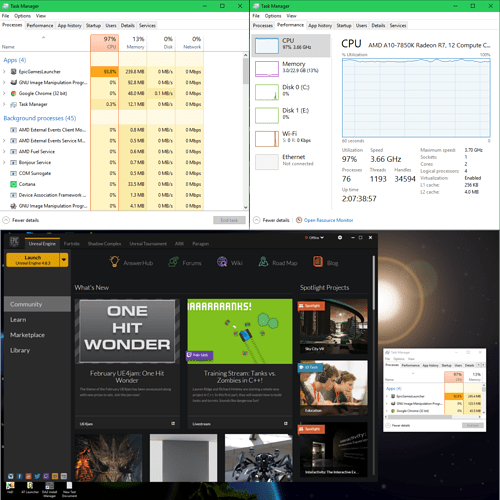 Just installed Epic Games Launcher yesterday, It was 2.9.0.0. And today the problem about CPU reproduces for me. It loads my 6-core CPU to 20% (which corresponds to 100% on low-core CPU). It occurs after sleep/resume. And also after sleep/resume my account name appears with red dot as though I am not logged in (and only Sign In in drop down menu). Perhaps I will not use launcher anymore, and my post here is just to notice that not all problems in launcher are solved yet.

We are currently working on another Launcher release with additional CPU and memory improvements. Keep an eye out for it next week.

You two may have found a bug with hibernation that we’ll investigate.

I noticed this too, but only when it was not minimized.

We are currently working on another Launcher release with additional CPU and memory improvements. Keep an eye out for it next week.

You two may have found a bug with hibernation that we’ll investigate.

This bug happened to me today which is why I’m typing this post. I’ve never hibernated this PC (pretty fresh install), only put it to sleep a few times. It was taking up two full cores all of the sudden. Thinking back, I remember the little colored dot by my name & balance was red when I closed it for misbehaving.

Anyways, thanks, I will be looking forward to the performance fix.

Same thing happening to us also, on multiple machines. I hope this is fixed soon. The biggest problem is the launcher wants to run in the background (e.g. suggests to minimize to tray, opens by itself with other applications sometimes, etc.) and the only solution to keep our system from paging all the memory out is to change the name of the launcher executable (as mentioned earlier in this thread). This should be a HIGH priority fix as it seems the Launcher is a central component of the Unreal engine infrastructure. What is amazing is that the Launcher uses more CPU/RAM while sitting idle than does the actual editor during (albeit minor) editing of a project!

Thanks for your help on this!

I’ll add my screenshot to the mix: 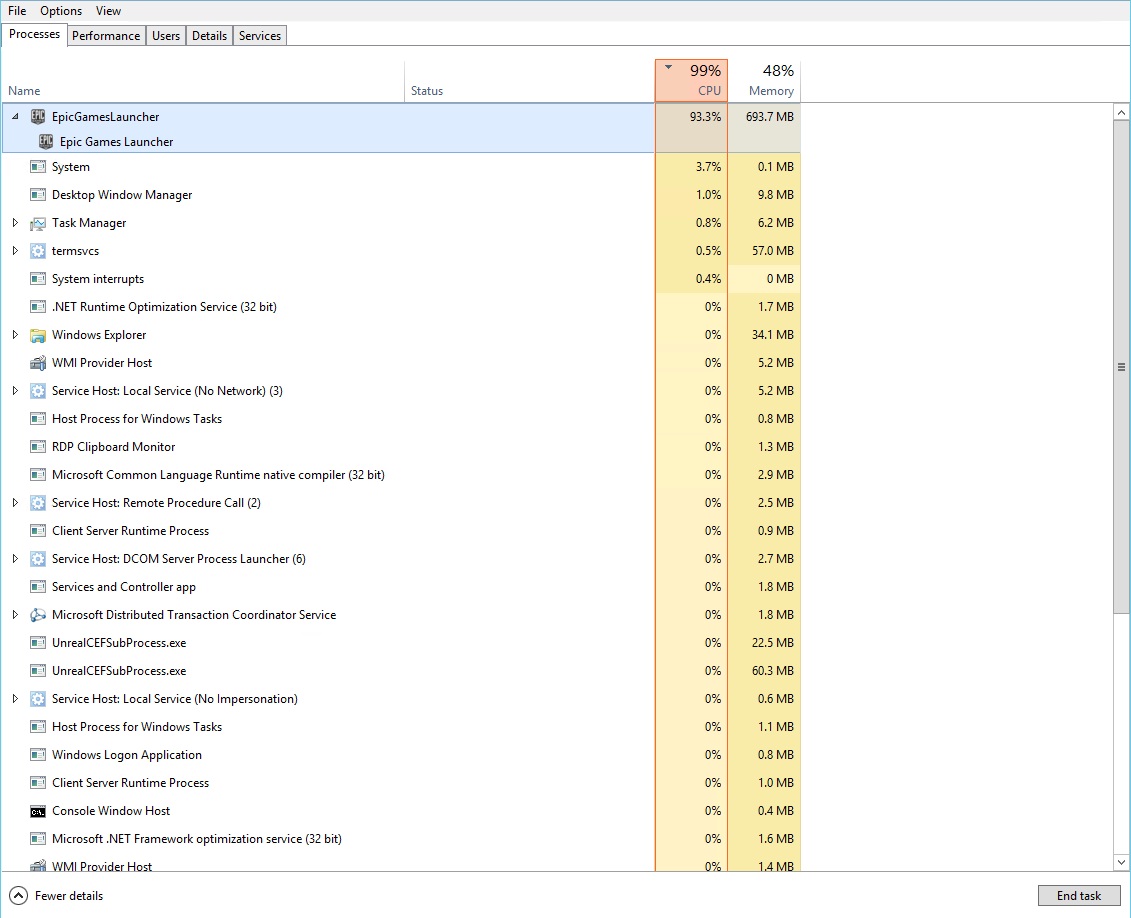 Minimizing it brings it down to 23% which still seems absolutely crazy… What is causing this and what is the progress on actually fixing it?

It got worst, the launcher is now freezing my cpu and ram for a while when starting the thing.
Background use is not only affecting Ram and Cpu but also Editor Framerate and Assetloadtime.

I understand that the unreal engine is not for weaker systems but a launcher that takes almost as much ressources as a project is just… Who thaught it was a good idea to start that thing every ****ing time?
Or minimizing it? Why should minimizing help, it still takes alot of ressources. You guys should really build a better launcher XD

Like one that does not auto logs you in so i dont need to wait 5 minutes for that thing to unfreeze. JEZUS