I had a blueprint in the marketplace a while ago called Adaptive Audio Occlusion. It was started before audio occlusion was implemented into the engine, and released just after. It was rough, and I wasn’t happy enough with it in it’s released form. I’ve recently begun working on a newer audio occlusion blueprint, instead of focusing on diffraction and automation, I’m focusing on providing a realistic use case product for projects. Here are the two things I focused on for this blueprint:

What does this mean? Here’s a video (sorry for the aspect ratio): 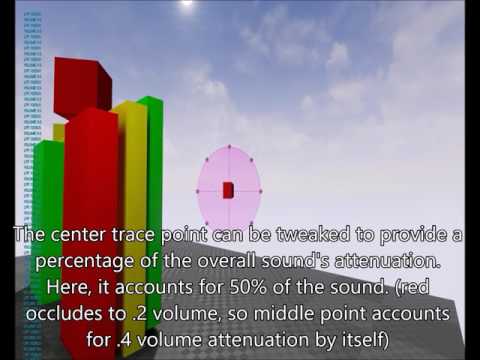 The trace points themselves are able to be edited to your needs. Here are some images of different scenarios for sound traces:

This is all meant to work with your audio in the game. The sphere size is automatically created by using the minimum attenuation extent, and the blueprint works along side attenuation settings such as “attenuate with LPF” based on distance. This blueprint would take the place of in-game ambient sounds. You would drag it in, and assign it a soundcue. Pretty painless.

I’ve also been tweaking the blueprint to be minimal on performance, and I think it’s going pretty well. Here’s an image of several blueprints with dozens of traces and no noticeable effect on performance:

If anyone has any questions or comments, I’d love to hear them!

Been fine tuning and adding a few features that I think will help. Pretty close to submitting to the marketplace. Hope someone can get some use from this.

Here’s another video with a direct comparison between the current state of UE4’s integrated audio occlusion and my blueprint:

This is pretty great, Im assuming that these can be movable blueprints, so for instance they could be attached to the muzzle of a gun and follow the weapon around the level?

Yes, these are blueprint actors that you assign a soundcue to. You could attach it to whatever you’d like, reference the attached occlusion blueprint, and play the audio component and it would work as intended.

Can I request a feature? It might be out of the scope of this asset, but could potentially be a product you can make in the future. It would be great if you could make some sort of spline actor that has a sound actor that moves along the spline to follow the player. The use of this would be for sounds that need to cover distances, such as waves along a beach, or humming through vents, something that doesnt have a single local audio source.

Interesting idea. I like the way you think. I’ll have to think about how something like that would best work. At first thought, it may be weird to have a sound follow you to mimic a wider audio source since the sound would always sound the same. For instance if you have a wave crashing sound that follows you along the length of a beach, the sound would never overlap into other wave sounds like you would expect in a natural setting. You’d expect to hear one wave over here and an overlapping wave over there. Of course with sounds that don’t have as much variation it might be different, like air from a vent.