Users now have the ability to split a struct pin directly in place on the node instead of having to insert the Make and Break nodes.
Before if you wanted to hardcode the Actor Location you had to add the Make Vector node and connect it in.

With the Split feature you can right click on the New Location pin and choose Split Struct Pin.

Which will result in the vector pin being replaced by the component float pins being created in place. 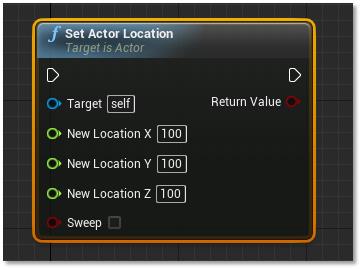 You can recombine the pins back together to the vector by clicking on any one of the component pins and choosing “Recombine Struct Pin” as long as none of them have been connected to another node.
If one is connected the recombine option will be grayed out.
This works for both input and output pins of any struct and if the split struct also contains structs, they can also be expanded.

Find-in-Blueprints has been given a significant revamp to accommodate feature requests and should now be more robust and useful.Searching should be more all-encompassing than ever before, finding: nodes, pins, pin values, graphs, variables, variable values, as well as searching animation graphs.

Searching is an asynchronous process, meaning it will not prevent you from using the editor as the search completes, you can also make multiple searches in different Blueprints at the same time.
Level Blueprints are not fully supported, though you should be able to search your current level without a problem.
There are a few things to be aware of with this new system.
Find-in-Blueprints now leverages the DDC for the searchable data, when Blueprints are updated their information is refreshed and when another user synchs that Blueprint the searchable data will be unreachable.
When Blueprints are not indexed in the system, it will inform you, as in the below image:

**Note: **Should warn that indexing all loads all un-indexed Blueprints to cache searchable data.
Any Blueprints that crashes on load will (obviously) crash. With that risk in mind we do not recommend doing this with unsaved data.
No Blueprints will have to be resaved for the indexing process.

Can we get a setting in the editor preferences which overrides the loop limit, pretty please?

Editor Preferences seem to be missing in the latest preview build. Did they move?

Hah, They did move.

FYI: On Mac, the editor preferences are now in the Mac menu bar. Unreal Editor -> Preferences.

The node is just tested. It should be hopefully ready in 4.4.

When splitting a Struct as Input in Set Nodes, Arrays in that Struct are not recognized as such.

Thanks for the report, I’ve reproduced the issue and fixed it in https://github.com/EpicGames/UnrealEngine/commit/ccd81ecb9a15f45e2d60df0bfedee0fe9c2f225c

The node is just tested. It should be hopefully ready in 4.4.