Endless Runner Blueprint: Making the world move rather than player

Hello, i’m new to the engine and making projects for that matter.

In my game, the world spawns in a straight line and player moves on a lane based system. Now the problem with this is that if you keep on going straight for a long long time while playing, the game gets stuck and the player character disappears.

A solution (which apparently how it should be is) that the world moves to the player while the player stays stationary.

Now, I just cannot figure out how to make this happen in regards to the tutorial. I do want to have different floor tiles just as in that tutorial (But right now I just have 1 main floor).

I tried some things but they don’t seem to be working as intended.

What I did was on every tick, I will get the scene’s (of which everything is child of) world location and subtract 1 from the x-axis. Now this seems to be working but, the obstacles that I will spawn on the floor randomly via arrow points maintain their location. Here is an image. 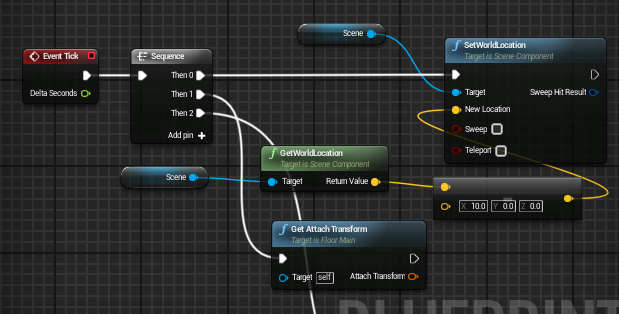 Also, gravity affects my player and even If I make the floor move, it will simply take the player with it. How do I make my player stationary while getting affected by gravity so it can jump.