End of sequencer character come back to t-pose

Newbie here, hi to all,
I’m trying to learn about animation.
I used both skeleton or animations(animated character to idle) and I am now able to create a working animation. However when animation end my character lock in t-pose. If I check Keep State in animation he remain in idle position but freezes.
Many thanks for any help.

We see that this is your first time posting in our forums!

We’re SO elated to welcome you to the Unreal Engine Community! There’s so much you can do here! Earn badges through participation! Find out what’s new! Connect with fellow members! Take courses! Share any of your creative works! Here are our Community Guidelines on how to be a superhero member!

I understand that you are having issues with your character being stuck in T-pose. It’s a great thing that you’ve posted your concern to our forums, because other members have gone through the exact same thing! Here are two links (here) and (here) that should get you started in the right direction. Please let us know if this works for you! Thank you so much for being an important part of building a stronger community!

Many thanks DOVHA, however the links you provided are about t-pose while animating.

I’m not in ThirdPerson, I just want to play some cinematic and to have at end my characters continue animating (most time in Idle animation).

As I was an Unity programmer, I remember something like to use states (and timeline events) to switch different animations. But I really like to avoid this and to get an idle animations also when timeline ends.

Sorry for this book I wrote, but I’m Italian and I really don’t know if I’m as clear as I want…

P.S. my goal is to build an app, not a game, where cinematic sometime ends to interact with users with hud menu. Yes, I should move characters and objects and play beautiful animations during timeline, however open a menu when the character behind is not breathing is terrible :-). Yes I should get it with States, however the power of the blending (time and precision) provided by the timeline is too much better to exclude at prior.

When you go into a state things are cool as the final pose is based on the “current” state. Once you exit the state you need another state in which to exit to. If not then the final pose will default to what ever the bind pose is set to.(usually the A or T pose)

Yes, I understand this.
Anyway I’m talking about not to use states(sequencer only).

Why he does not come back to previous state (idle animation)? There is a way to obtain this without using states?

OK so a bit confusing? Are you looking to do this in Sequencer or just trigger the animations in sequence with out having to resort to using state machines.

Assuming the second you can create sequences using a Montage as your takes, clips, can be added to a time line and you can then loop the last sequence and it will play forever until you reset the montage.

Montages are mini sequencers but can be interacted with in real time.

yes the main idea was to use sequencer only to play animations (no state machine). And yes the idea to have the last animation looping forever sounds like I want.

Assuming the second you can create sequences using a Montage as your takes, clips, can be added to a time line and you can then loop the last sequence and it will play forever until you reset the montage.

I’m watching right now Montage. Many thanks for the tips.

Hi Frankie, as I can see montage is similar to states? And in all video I seen it was used to give to ThirdPersonCharacter a strong way to blending animations in realtime.

Many thanks for your reply anyway.

Please, if I missing something about montage please be patient and provide a link… As I have seen montages uses Blueprints to work…exactly like states? And the sequencer of the montage appear related to animations only, like states, and cannot mix animations and world position (e.g). Yes, there is a blending time that should be great, however using sequencer only should be a lot more comfortable for long cinematics or when you have a lot of characters on screen to animate…

A montage can be applied to any object that contains an animation track.

A place to discuss Sequencer, filmmaking, and cinematic creation.

As I mentioned though a Montage is a sequencer that sequences at the object level and you can dump the controller stuff. 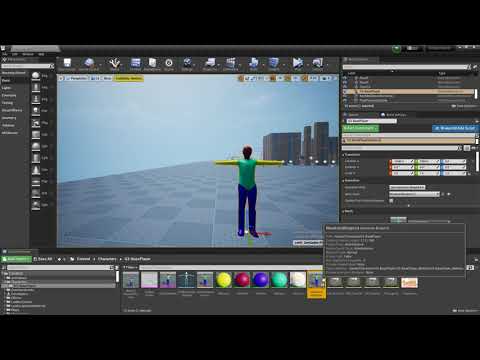 Just use any tutorials on how to use a montage in a blueprint and plug it into the direct drive.

Hey many thanks for the video!!! You won a beer when come in Italy, sure!
Ok I continue to learn montage and let you know! many thanks again!

Finally, solved: this is exactly what I’m talking about:

In practice I need to add a simple SLOT in animation Blueprint. The entire article is talking about to do much more like blending from sequencer to game, but also using the SLOT alone solved my problem completely.