Hey guys, I’m in the early stages of making a real-time strategy game that involves a lot of interaction with objects in a level (like lights etc), and I’m having a hard time getting input functions to work properly with it.

this is the part of my controller responsible for selecting units (from what I have debugged, this does work, the objects in question do get selected). Sorry about the split between the two images 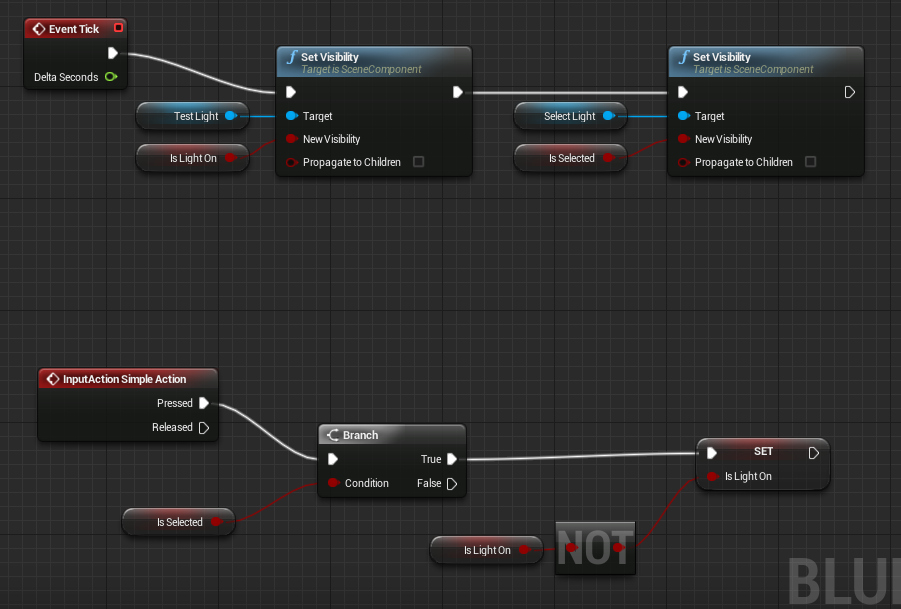 The lights do turn on or off if the variables are true or false, but I’m getting nothing when trying to press the ‘Simple Action’ key (which I binded to ‘F’ in the project settings)
I thought doing enable input in the controller would have worked, but it’s proven fruitless.
Is there some other method of getting input from any given pawn that I’m missing?

Well IsLightOn is trying to be set by itself.
Are you trying to make it switch On with 1st keypress and then Off with 2nd keypress?
You would do better to use a FlipFlop node which has 2 outputs so you press the key A fires then next time you press it B fires.

Next is when you press a key is the event firing past the true to the Set IsLightOn?

If so then change this get rid of the NOT and just set the condition using the checkbox. Checked being true and unchecked being false this in conjunction with the flip flop.

I did assume that setting a boolean to the opposite of itself ran the same function as flipflop.
I tried both, but neither are returning results. I don’t think that’s where the problem is, when simulating the event tick is showing activity, but I am getting no event fire when I press the Simple Action key.
The below image is an example of what I’m seeing (I’m not sure if I’m actually using the flipflop function properly, sorry if I’m not) 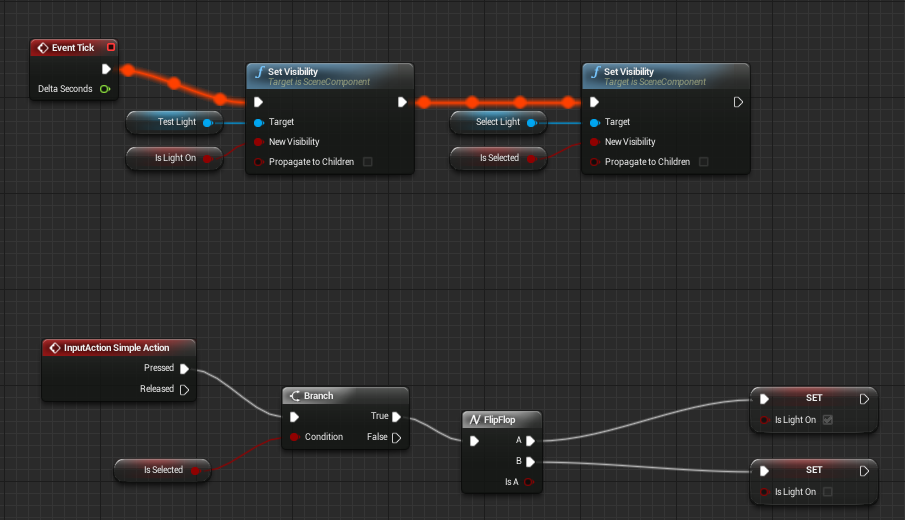 So you see no output up to the branch?

You could try adding some debug markers by right clicking on a node and then run the project to see what’s going on.
The flip/flop setup is fine.

Alright, I put a breakpoint on the ‘enable input’ node on selection and one on the simple action input node. At the very least it’s confirmed the previous assumption, as the input breakpoint was triggered but the input breakpoint wasn’t.
I’m still fairly new with the way input controllers work with their player index, so I’m wondering if that’s the problem here?

Ok after looking at your blueprint closer you are selecting a light and then triggering it to turn on. But this is all done with 2 buttons/keys correct? But after selection you cant control the light turning on.
I am not sure where the break down is happening but there could be a better way to do this just not sure until I try it out.

Sorry, I meant to say as the ‘enable input’ node was triggered but the ‘simple action input’ wasn’t. So essentially, all the events that follow the left mouse button work fine, but the one for the F key (simple action) isn’t.

I’m still guessing it’s something related to the player controller stuff, but I really don’t know.

Sorry so blind an missed the obvious big question where is the simple key action?
Is it in your character blueprint?

The simple action event is in the pawn blueprint itself, yeah.
Its likely i may have different inputs between the different selectable objects in the game so i figured this architecture would have been the easiest to work with, otherwise i may have used event dispatchers instead