As the title states, I’m attempting to change some of my camera settings when the character reaches a specific velocity. It’s a 2d sidescroller, and my first project while trying to get used to UE4’s systems.

Here is what I managed to hobble together via semi related tutorials and guesswork.I know I’m doing something wrong (maybe everything) but the system is so user-friendly I feel like I might not be too far from the actual solution.

Hm one thing to consider is if you’re using the comparefloat node you don’t also need a branch node.
I hope you have all those connected to something and not standing empty alone like you have in this screenshot (as it would do nothing in the state shown, since nothing is feeding into the Exec pin on Comparefloat).

Also your MakePostProcessSettings node doesn’t actually set anything on your post process, it just creates a set of data that can be used to set the post process if the execution wires (the white ones) were to feed into something coming off of a Post Process object reference that sets those things.

hello. are you increasing the speed using an input event ?

Not sure if I understand the question. The speed increases due to the acceleration setting of the character, so as they move along the x-axis they gain more speed. So if I’m understanding correctly the input event would be the player holding in the “D” or “A” key for a period of time.

It is just sitting there unconnected to anything, as I said I’m a complete noob when it comes to this. So I’m not sure what plugs into what aside from what can. What would this connect to and from? So my very poor example aside, I guess the question is how would I go about achieving the end goal? Do you know of any resources where I could direct my search?

hello. check the screenshot for the fov setup. hope this helps. 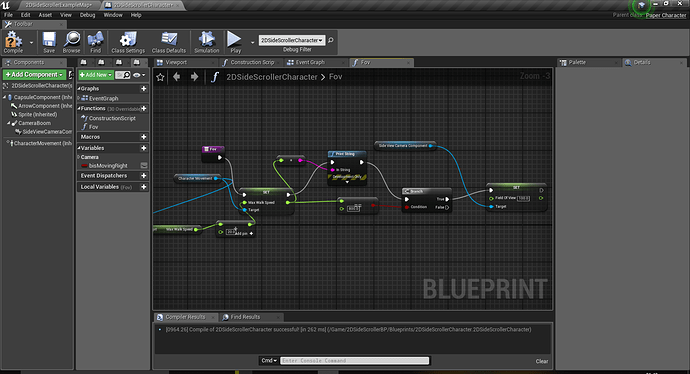 Thanks, I’ll give it a try! What is your “character movement” node plugged into on the left side?

okay. on the left side it is plugged in to the get max walk speed node. if u have any other question feel free to ask.