Hello all! New to UE4, had a question about something peculiar occurring in my blueprints.

When leaving an input empty (a SlateColor) it is automatically defined as FF00FFFF - I’m wondering how to change this automatic definition, or how to ‘allow’ empty inputs to take on a default value that is defined elsewhere.

Every time Print String (to UI) is called, it fires off a custom event called PRINT_STR. In that event, a Print_Msg_Block is created, and then customized via a function called Customize Print Message (which is defined in Print_Msg_Block blueprints).
I didn’t want 2 separate functions, for PRINT_STR and PRINT_STR_WITH_COLOR, so I set a default color in Print_Msg_Block (and this color is bound to the color of the Text Block widget). My thinking was that I could simply leave the color input empty, and the default is chosen. But due to the structure, as you will see, leaving the input empty creates a ‘default’ hot pink color with a hex value of FF00FFFF.

So, here’s the default value defined in Print_Msg_Block for my MessageColor variable (which is bound to the color of the actual Text Block): 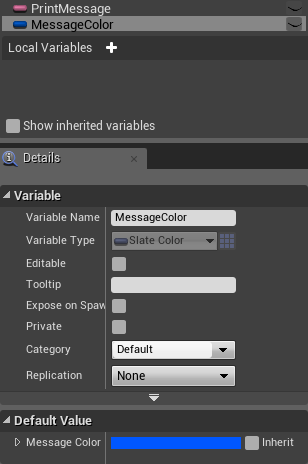 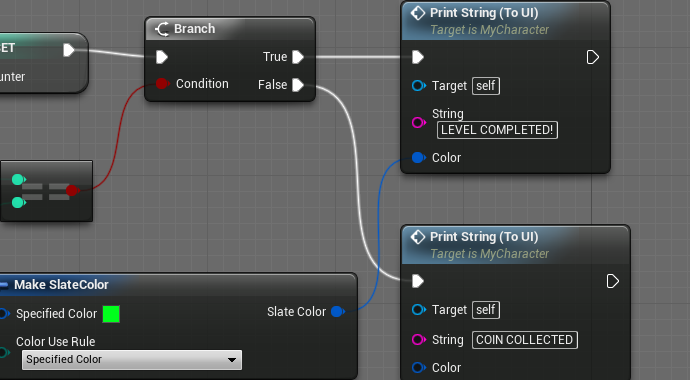 Since the False-branched “Print String(to UI)” is empty, I’d like it to take on the blue color. But it doesn’t. This is what happens: 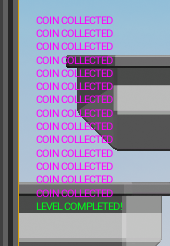 It seems the default SlateColor is FF00FFFF. Without passing one, one is automatically created with that damned default value. And the way my blueprints are structured, it sets the input received (which is this newly created FF00FFFF color) to the MessageColor variable which is bound to the actual color). Here’s the structure of the print sequence:

Which does the usual Widget-y stuff, but also calls Customize Print Message defined in the Print_Msg_Block blueprint (also, someone please tell me if there’s a cleaner way to keep the Scroll Box scrolled to the bottom, as every new entry sets the scroll bar to the top):

And finally, here’s Customize Print Message. It simply has to set the variables since they are both bound to the correct things (Text Field and Color Field) in the TextBlock in Print_Msg_Block:

Thank you very much for reading!

You could set the value at event begin play for example.

Hello,
Create a variable for your “specified color” and set this variable to the value you want when you know what kind of info you will write. If you have more than two colors, you can create an array with all your used colors and use the index as source info to know your color by using “find” in the array and set your value which will make you set only an int from 0 to max color.

Edit : variable is not a color but an int and this is the output of the “find” from color array that you link to the input “specified color”

I’m aware of just creating a variable with my color, however, i’d like to eliminate that altogether and not require dragging on an extra node every time I want to call the function.

I was just wondering what makes that ‘default’ color to be FF00FFFF when nothing is specified. (Also, what’s a better way to set scroll offset to lowest in the box without using 9999999 as my float value?)