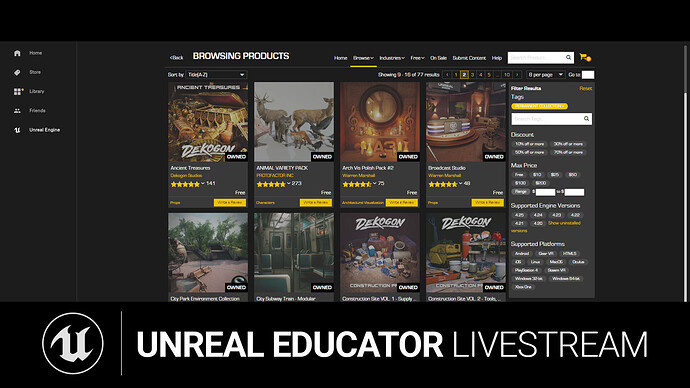 During this Unreal Engine Educator Livestream, we will meet and talk with Senior Marketplace Manager Josh Fleming about what it takes to become a Marketplace seller. We will also meet Clinton Crumpler who is the owner and Creative Director of Dekogon Studios, one of the more prolific content sellers on the Marketplace.

We will cover many of the details and best practices for educators and students thinking of entering into the exciting and lucrative world of selling content on the Unreal Engine Marketplace.

Please join us once again on Friday, September 25th for another informative and valuable Educator Livestream on twitch.tv/unrealengine.

entering into the exciting and lucrative world of selling Unreal Engine content on the Epic Games Marketplace.

Can Epic address the issue of respected creators leaving the marketplace in the past 1-3 years pls…
For example, how can there be unanswered questions like this, festering like some zombie corpse?
Epic needs to say something about that. Otherwise ‘exciting & lucrative world’ is at odds with reality.

Epic has done a lot of work on the Marketplace… Its evolved so much since the early days of Jon Jones.

But why not make the Marketplace be all it can be? Encourage more Devs to make ‘ambitious’ products](Easy Voxels: Cubic - #6 by Yaki_Studios - Marketplace - Unreal Engine Forums).
Why not eventually make it a safe work platform too, so devs can buy creator time and avoid scammers?

Granted my active products aren’t “great big and complex” (Any other dev like me can spend a week and end up with identical quality items, even if that’s 100% true for 99% of marketplace items anyway).

However marketplace sales aren’t - and never will be - enough to justify anyone exclusively developing content to sell imho.

Most sales occur during a marketplace sale event. So you are already getting 50% or more less then you actually priced the item at.

On top of that, you have to deal with the marketplace validation which in itself is a pita due to the way its handled/ the fact the epic team is obviously stretched too thin.
(I see no other reason for them flagging my product which is meant to allow users to customize camera transitions/speeds as bad quality for having “too fast transitions”.)
Believe me, after 4 rejections due to BS like something listed above you do not want to deal with it anymore since it takes you more time than money you will likely ever make from the product.

To top it off you also now have to work around the input stuff in order to produce an add-on that can be added to anything and does not require you to create a separate project.

It’s not the end of the world (do it once, include it in all projects). But then you spend time answering users questions about “how do i hook up the old input?” because they force you to also remove the nodes from the BP (which are flagged as warnings, not errors btw, so they do not prevent anything from working, they only AID users in understanding what is what).

So yea, there’s that too as a deterrent.