Editing a value in a map/dictionary?

If anyone has worked with map/dictionary variables before, I’m not really sure how I can edit the value of an element in the map/dictionary?

Here’s a picture of what the setup looks like (been following unrealgaimedev’s tutorial to try and streamline my systems): 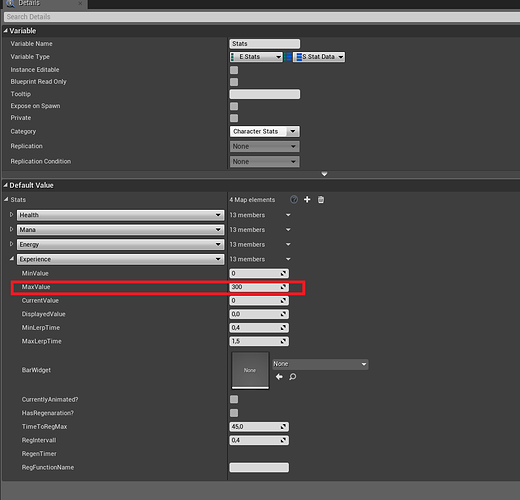 Now, I would obviously like for each level up to require progressively more XP, which is fairly simple, just multiply the max value by a certain percentage at each level up.

However, I do not know the functions I need to actually edit these particular values?

This is what I’ve tried right now:

Not working obviously, but am I at least on the right path here?

Have tried break and then make too btw.

Figured out what node to use for it, if nothing else:

Now it’s just a matter of doing it at runtime without breaking everything… That one is a bit more difficult it seems.

Ah got it. Ain’t pretty, but it works:

I thought there was some functionality whereby hiding the unused pins wouldn’t edit them but guess I was wrong about that. Or misremembering.