Edge of Chaos draws heavily from medieval history & folklore as well Anglo-Saxon and Celtic myths, superstitions and literary works such as Beowulf. We then melded this new medieval fantasy world with prehistory, rewriting it such that Ice Age beasts would roam our world, changing its cultures and history forever.

We felt it is time to pen a new chapter in real-time strategy that goes back to what old games did so well. Creating a modern competitive online game that balances the importance of multiplayer with a deep single-player experience.

Why build the next WarCraft, Company of Heroes or Age of Empires? We want a new chapter that won’t alienate the RTS gameplay, but instead bring all the positive elements of RTS and improve upon them tremendously in a whole new world.

In order to build an RTS world that is unrivaled graphically, Edge of Chaos visuals are developed with a unique and immersive, realistic and gritty atmosphere. Tech advancements finally allow us to build the kind of game quality that RTS deserves without sacrificing performance.

Edge of Chaos will feature full physics based combat and VFX as an other next-gen feature. We want blasts, AoE spells, massive creature attacks to really feel like they have an impact, damaging the environment, sending units flying and much more. Fully Destructible

Edge of Chaos features an ever-changing battlefield as a result of player decisions.
Units and magic can create changes to the battlefield by knocking down trees, blasting craters and more. Buildings can be destroyed, captured or brought to a complete rubble.

We are a small team consisting of members from all sides of the world. The idea for our first title named Edge of Chaos was sparked back years ago, as we watched a discrepancy in the production of Real-Time Strategy (RTS) games and their strategic developments factors over the years. We believe that the dying genre that is today known as RTS is a dream that is worth fighting for. We have carefully recruited interested developers, artists and programmers with profound knowledge in the genre along with years long experience in the entertainment industry. As world-builders, RTS enthusiasts and competitive online gamers we are on a mission to build the next-gen RTS game.

For a small studio this is no easy feat, as achieving a build quality fit of a modern AAA RTS game takes tremendous effort; however that is exactly what we are aiming for. We want to lead the future of the genre and bring another epic storyline that deserves to be in the game’s industry hall of fame. The team’s budget is incredibly limited for the time being. This is the sole reason why we are turning towards crowdfunding and hoping to continue working on the game full-time and expand our team further without the introduction of third party publishers as we want to retain all creative control of our game. We are taking the Blizzard stance to release dates and wish to absolutely release only the finest and polished quality version of the game for everyone to enjoy.

Some of our favorite RTS titles over the decades include Warcraft, Company of Heroes, LOTR: Battle for Middle Earth and Age of Empires.
We are fans of particularly Warcraft: Orcs and Humans for its early darker, grittier feel compared to its successors. Warcraft 3: is one of Blizzard’s RTS masterpieces. We thought that shifting the attention to hero units and their contribution to the battlefield was a fantastic ideas as it gave birth to an even further genre; all this while being driven by a meaningful story and fantasy world.
Age of Empires 2 is a big inspiration for us. AoE2 took the scope, scale and depth of the genre to new heights.
We loved Battle for Middle Earth for introducing palpable physical combat in everything from cavalry charges to the summoning of Balrogs and ground-breaking RTS vfx for its time.
In terms of strategic aspects of the genre, Company of Heroes is our top pick. The introduction of real destructible terrain and buildings alongside solid, sophisticated physics-based combat in the form of artillery, tanks and explosive shells is something that we want to continue exploring in Edge of Chaos.

our Happy Halloween video, showing one of the animals featuring a little magic:

The visuals already have bougt me in. Had the feeling I wanted to wander around and see more of that world. Keep us updated also on gameplay

Looks great so far! Looking forward to more updates. I’m interested in how your doing the destructible terrain part. Are you using a voxel plugin?

Thanks! We are preparing a smaller level for game-play tests, so true RTS stuff is coming soon

ATM we use static landscape, only other objects are destructible, whose update is handled by pathfinding and AI systems already. Probably the voxel plugin is going to be used as a start especially because it supports multiplayer, but later a more performance efficient simple heighmap based runtime mesh solution would be the best…

What is missing in the list of RTS inspirations is SupremeCommander et al. The limitless camera zoom as well as the control methods of huge groups of units is unmatched as of now.

The world and characters look stunning!
Can’t wait to see some game play!

And some fresh pics of our world:

I saw elephants in a non african trees forest, and get why it called edge of chaos.

I saw elephants in a non african trees forest, and get why it called edge of chaos.

No they are not elephants :p, they are mammoths indeed, only the fur is not ready :o We will provide some megafauna animals, moreover they can be used as war beasts by the Wylfing faction! Btw elephants live in Asia too

need a little more on animation.

yeah animation is time consuming especially of our custom animals… human/ork/wylfing characters are WIP, they are using UE4 skeleton currently, so hopefully we can provide more cool stuff soon

(formation movement, and maybe some fight)

No they are not elephants :p, they are mammoths indeed, only the fur is not ready :o We will provide some megafauna animals, moreover they can be used as war beasts by the Wylfing faction! Btw elephants live in Asia too

Will it be like Warcraft 3 or like Age of Empire style? And is there a beta soon?

The beta is coming not so soon, we are in quite an early stage. Currently we are focusing on general game design to establish a unique world, creating characters, environments and trailers to show our concepts and high quality visuals to get funding for the project, and soon we want to show gameplay elements too, because lot of features of the RTS game system core are actually working fine!
We are all big RTS fans, so the game style is going to be a great mixture, hopefully with some extra fresh stuff, but we are of course inspired by Age of Empires, Warcraft, Stronghold, Company of Heroes, Total War, and a lot of other games 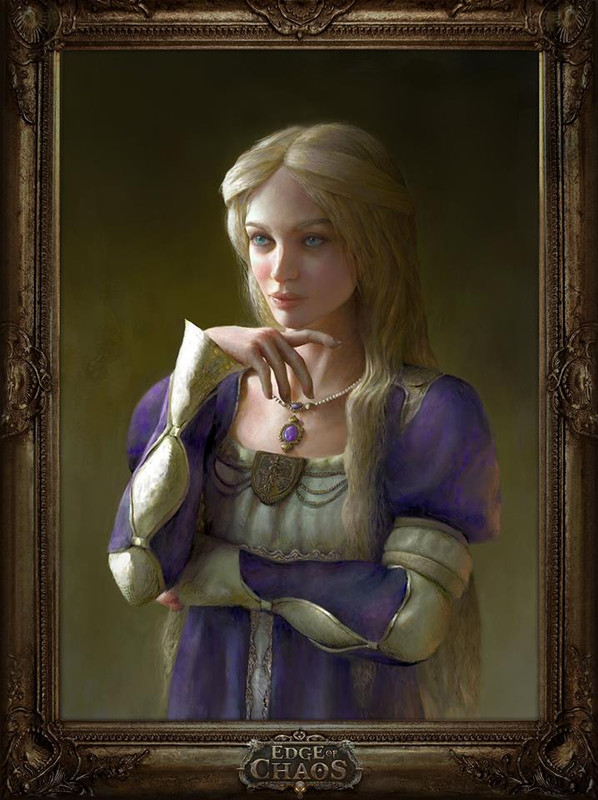 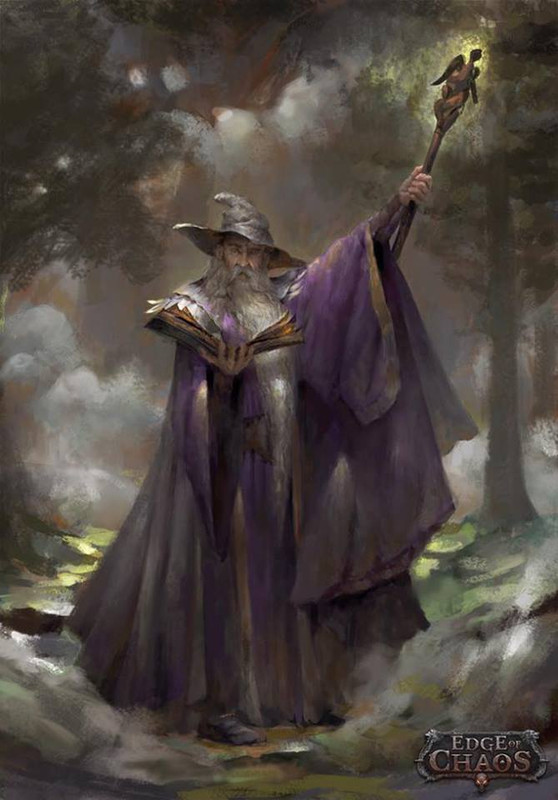 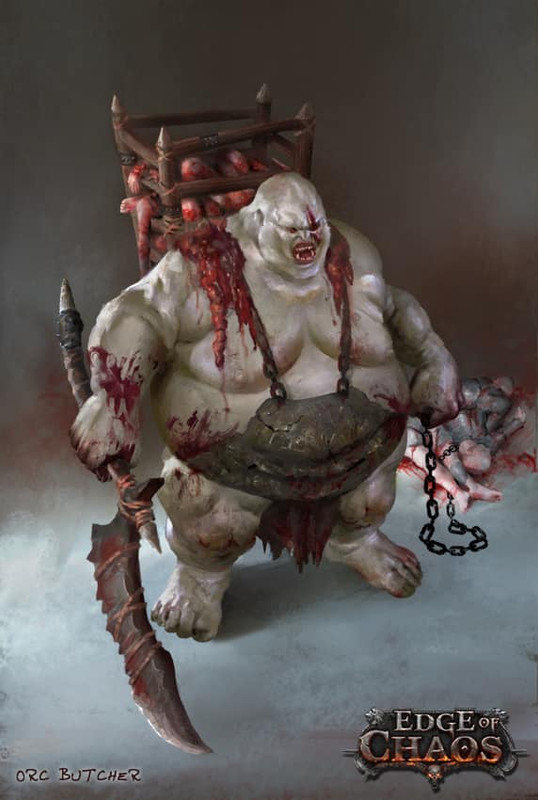 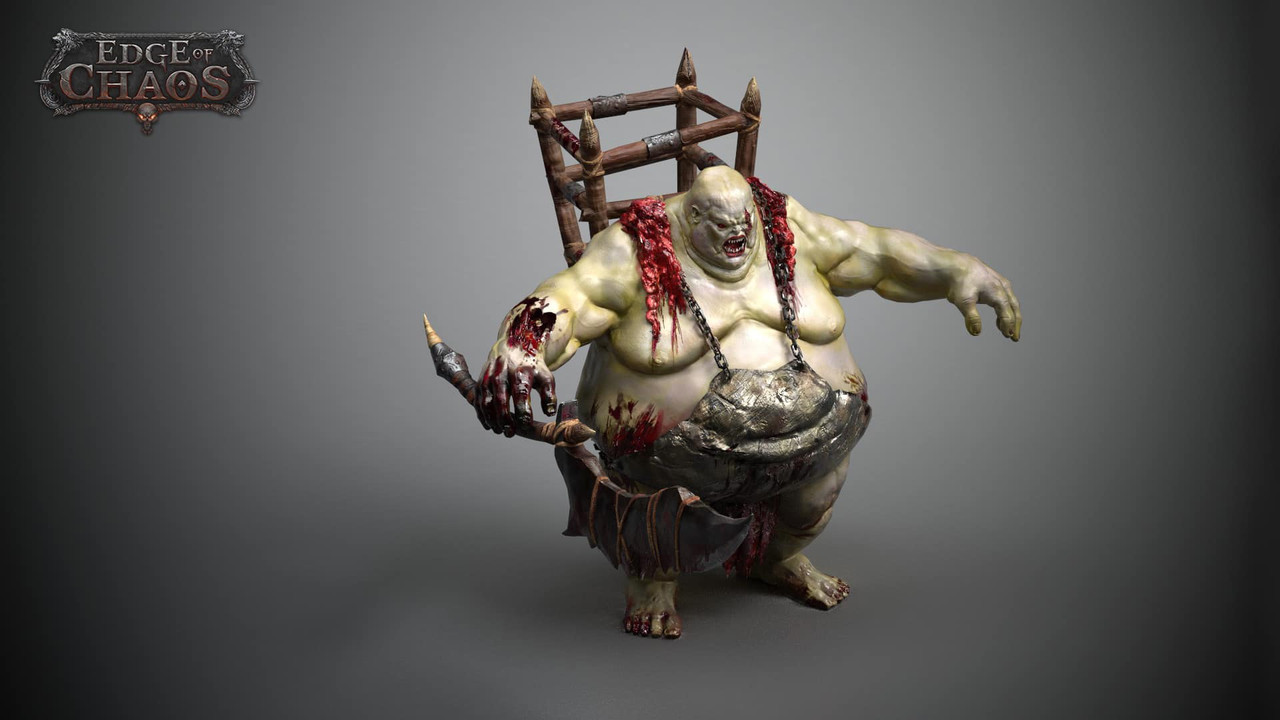 Orks and humans are apparently not good neighbors… especially in our game! We are preparing the first playable game level and characters: 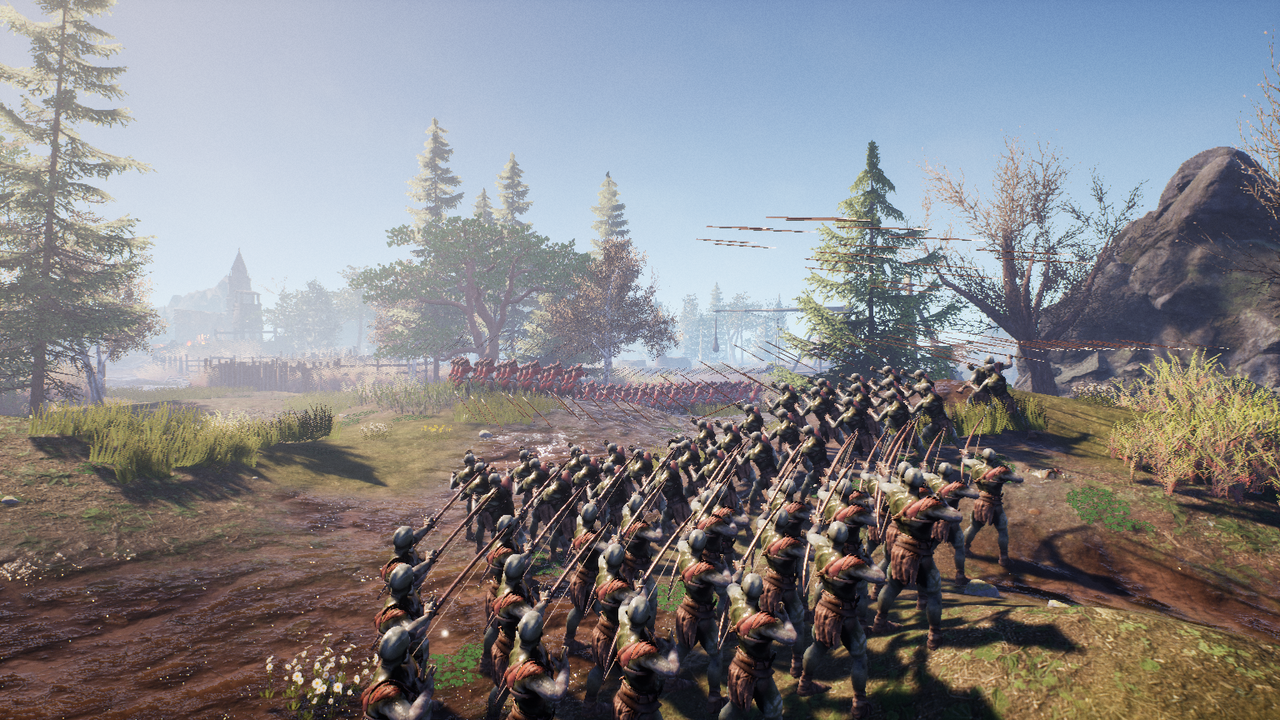 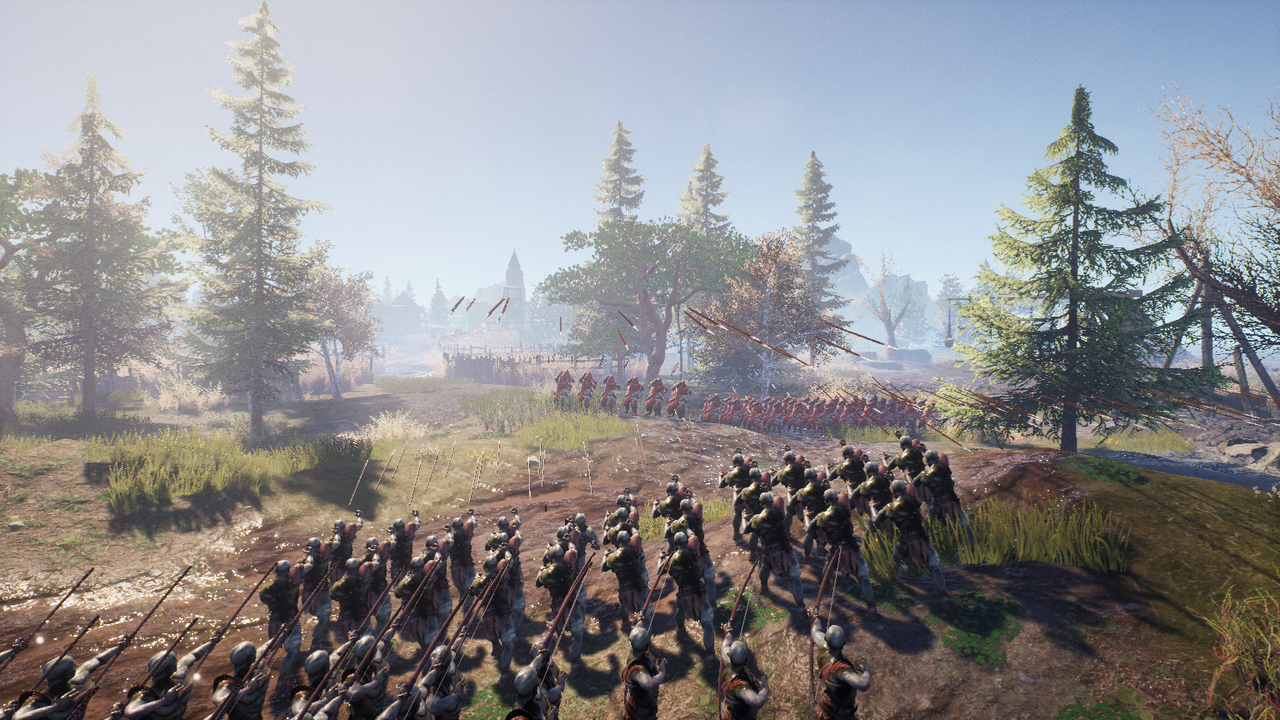 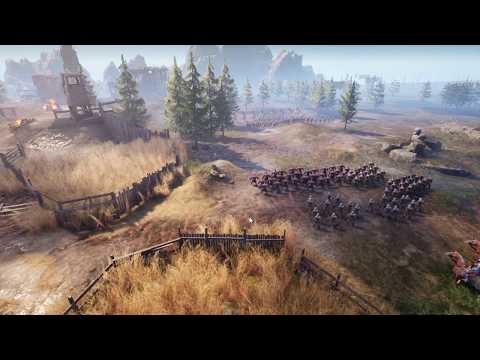 Edge of Chaos RTS
Some updated in-game shots with our improvements to pathfinding and formations.
More on Facebookand Discord 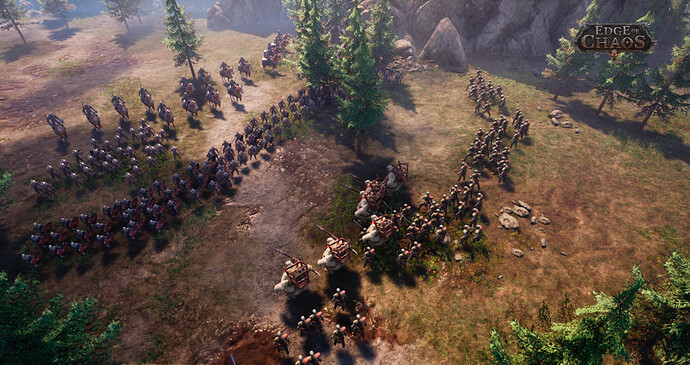 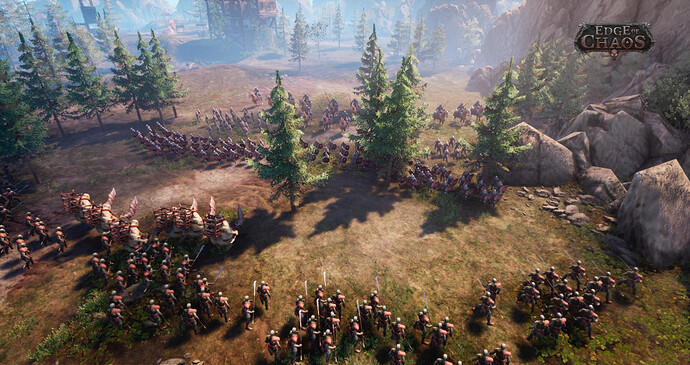