Will there eventually be support for the DirectStorage API to improve loading times of compiled games? 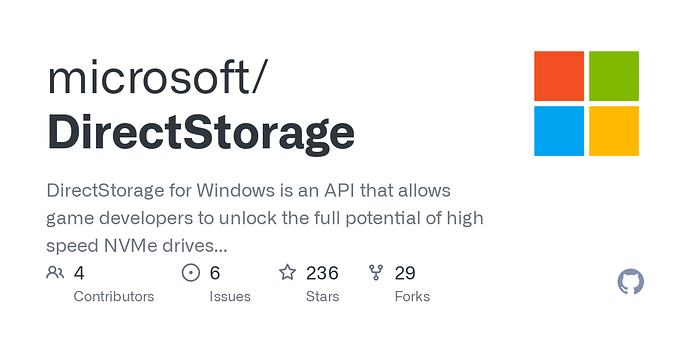 DX12U Direct storage and Sampler Feedback sound like are 2 “Must Have” Technologies for Unreal Engine 5.
I find strange Epic has not officially announced them aldready. The reason could be, at least for sampler feedback, UE5 have an impressive virtual texturing solution, the question is whether this solution could be enchanced by sampler feedback or if it “conflict” with it.

Yes, although I can’t comment on when. When DirectStorage is well supported by the UE file system Nanite and VT will be first in line to make use of it.

Strangely, they didn’t answer my question about Sampler Feedback and VRS. I feel like the real breakthrough is the combination of DirectStorage and Sampler Feedback Streaming. Maybe Virtual Texturing can be accelerated and improved with these two techniques. Plus, there’s texture space shading which should deliver nice improvements too.

I am so amazed with UE5 capabilities so far. On the top of that, UE team keeps adding even more “next gen” features!

Sampler feedback isn’t really useful. UE already has virtualized texturing in a lot places, already a better solution so there isn’t any obvious reason to use the former.

Software VRS would be nice. Hardare VRS would be almost useless on UE titles with nanite, it works on large “blocks” of identical/almost identical triangles (8x8) and isn’t suppored on PS5. But Software VRS can squeeze down to 2x2 blocks, or even 2x1/1x2 blocks, which are obviously much more likely to happen, especially with Nanite throwing so many triangles at the sceen. As The Coalition (Gears of War guys) already implemented VRS in UE4 I wouldn’t be surprised if like, UE5.2 might see software VRS show up.