Droplet: States of Matter is a 3D platforming adventure set in the Periodic Table Universe where elements, compounds and other scientific phenomena are personified! Play as Droplet and his sister Molly-QL, a duo that has the ability to change between the four states of matter: water, cloud, ice and plasma forms. With their unique abilities and with some extra help from Professor Humphry Heisenberg Otto’s weather machine, they need to travel the galaxy to recover the missing atoms and crystals from the mad scientist Dr. Ruby Dium as well as the pompous Lord Krypton and his devious lackeys. Explore the Noble Gas Kingdom, a sector of space filled with all sorts of unique environments. Water form allows for swimming and for a jack-of-all-trades approach. Ice form allows for freezing the surface of liquids to walk across. Cloud form allows for much higher jumping. And plasma form allows for blazing the way forward through activating hardlight bridges.

There are over 50 unique levels to explore with many secrets to uncover! 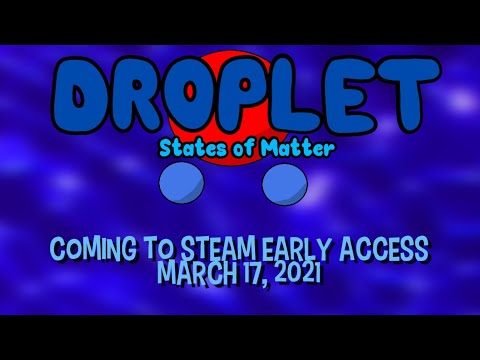