Downloaded engine built by other team member, but the engine compiles again when compiling game project

I downloaded (from Perforce) an engine built by other team member, and I tried to open our C++ game project by it.

When first time opening the project, I have the same “EngineAssociation GUID” problem like here, so I do a “Convert in Place” for my project. However, this action triggers the game project to be re-compiled, which further triggers the engine to be re-compiled. Furthermore, I tried to create a new C++ project, and the engine still compiles when I build this new C++ project.

This behavior is not desired, the built engine should be directly usable by all team members. So, how do I stop this re-compile? Thanks.

When your team member built the engine and shared it, did he also build the project in this newly built engine and share that via Perforce as well? As far as the engine trying to rebuild when you build the C++ project, this is going to happen in most cases, unless you sync the entire engine, including every file, the VS solution won’t know that it has already been built.

Thank you thank you Matthew! I’m so desperately looking for an answer!

These are the directories uploaded to Perforce (Engine and MyGame): 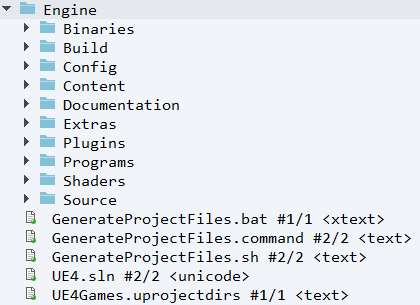 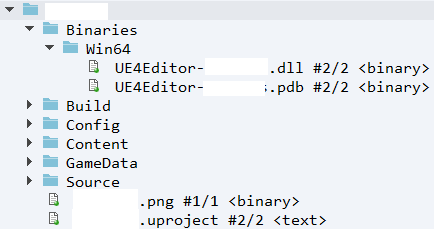 Note that /Plugins includes all /Binaries inside it.

unless you sync the entire engine, including every file

According to the above images, did I upload enough files?

In this case, if changes are made to the project on your computer that require you to compile the project, the engine will need to be recompiled once, but should never need it again.

Did you mean that, in an ideal case, the one who downloads the built engine need not to recompile engine, until some changes are made to the game project? Actually, we have successfully done an ideal case. Our 4.10 build (engine + game) is done in one machine, all team members can download it and open the game without recompile. If anyone modify the game C++ source and build the game, the engine won’t recompile, too. However this time we failed, the 4.11 build just can’t stop recompiling.

Hi Matthew,
If you need any further information, or you got anything for me to check on my computer, please tell me, thanks!

Thank you for the detailed response. I’ll be sure to let you know if I need any more information from you but in the meantime I’ll be testing this myself to just to ensure that I don’t get the same behavior. If I do, I’ll look into how to fix it.

Hi Matthew, got any news? Thanks

Unfortunately not yet. I was running into some issues with the build I was trying to upload to perforce for testing that had to get fixed first which caused some complications. I have another build uploading now so I should get to it soon.

Ok great, I’ll wait for you then, thanks!

I don’t seem to have any problems with this workflow. To be exact, this is what I did:

I have a feeling that the step that was missed may of been step 9 but I’m also not sure how pivotal that step is. I know it’s needed if you’re looking to convert the project from a previous version but I’m not sure about when the project is already suppose to be associated.

Thank you for the super detailed answer! I’d like to make sure several points:

I did some additional testing to get the answers for these questions for you.

In response to your reference to the documentation, please note that it is speaking of a project, and not an engine version. You have the option to not include all of the files that I did, especially outside of your initial commit, but as soon as a user who pulled down the engine attempts to compile a code project that is associated with that version, it will begin building the entire engine as well due to the compiler seeing it as necessary due to not having all of the files.

As for what I meant by “located outside of the same directory as the editor”, here is a visual example. 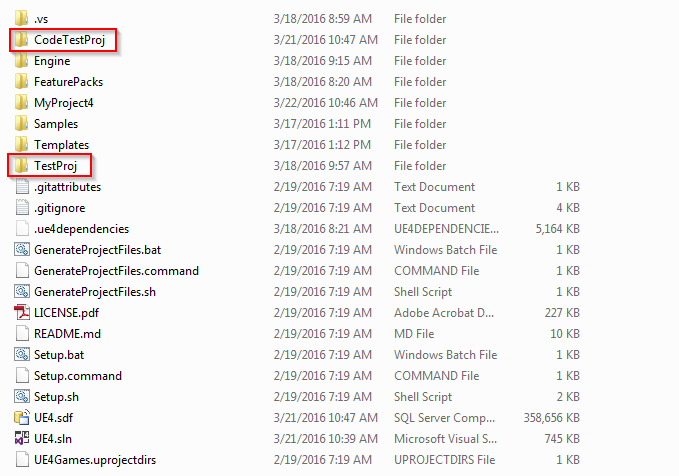 This first image shows two projects, CodeTestProj and TestProj which are both in the same directory as the editor. Neither of these projects prompted the newly synced user to convert the project or select an engine version.

This image is from one folder up in Windows Explorer. EngineTest is the file directory being shown in the first image. ExternalCodeProj, which is located here, did prompt the user to select an engine version.

Ok, that’s very clear, I will test the steps you provide and report the result, but will not be very soon since I’m working hard for the next milestone. Thanks!!

Ah, one more question, I still can’t figure out why my 4.10 build does not require users to recompile. Please note that my 4.10 build did not submit all the files to perforce, I did’t include Intermediate and all other temp folders. Could you help me to verify the reason of this?Thanks!

Sorry for my bad wordings, here’s what I mean: the 4.10 build is the editor source build, and I put it on Perforce. I also put the game project (originally compiled by it) on Perforce. My team member downloaded both of them. My team member opened the game project, and there’s a message box said he must convert the project (the image I attached above). The message box said it would rebuild the project but there’s none. So the team member is prompted to compile but the compile didn’t happen. However with the 4.11 build, the steps are all the same, but the 4.11 build does trigger the recompile of both game project and the editor.

Is the team member also getting the source code for the project itself? Since you’re getting that window in particular, I’m assuming that you’re running UE4Editor.exe and then, via the project browser, you’re opening the project from there. If you instead (before doing any conversion) double click the .uproject instead, are you still prompted to convert? When you do so, is a Visual Studio project (.sln) generated for you? If so, the .sln would need to be opened directly and then compiled to be able to open the project, as it has been converted and the current binaries aren’t viable anymore. If you do need to compile in this case, I would suggest right-clicking the project in the solution explorer and selecting Build from there rather than using the general build command from the toolbar, as the default project may be set to UE4. The goal here is that only the project would be compiled and not the editor, but that is something you’ll need to test.

Hello marsonmao, have you had a chance to look over my previous comment?