Double tap button for an event

so i was wondering is this posibble cause i wanna make a game that can run with double tapping left shift and also can walk like cs style with one tap left shift is this possible?

The double tap is easy:

figure out myself lol it turns out its a var

and also why after i press the double tap when i hld the sprint key it wont sprint do you need a new node for this?

What do you mean? You do “press, release, press”?

Can you show us your full BP code of what you want to create. Otherwise we have no idea why it is doing what you explained.

k this is the one 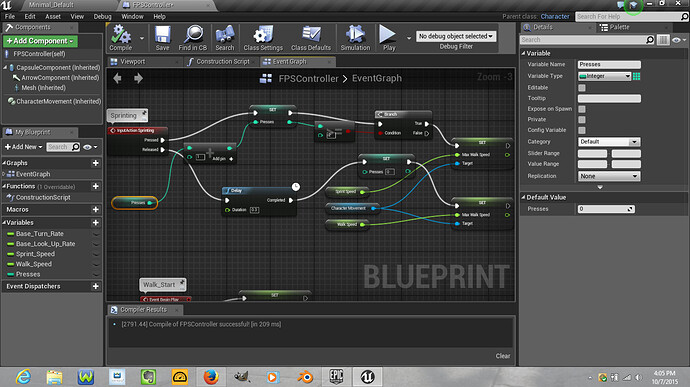 k this is the one

This should work if you do Tap-Release-Tap-Hold, the problem is that the delay from the 1st tap is still counting, so try and move your Set Max Walk Speed to be before the delay (keep the Set Presses to be after the delay), that should work. 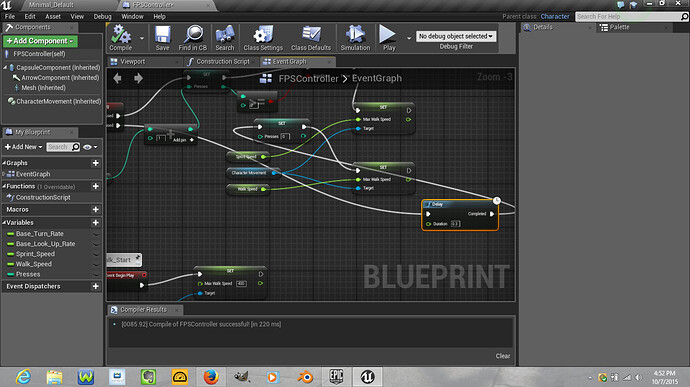 That’s no what I meant, switch it back to before you just barely changed it, but on the Released, it should be in the order of Set Max Walk Speed -> Delay -> Set Presses.

You need to change the white wires to change the order. It is always executed from left to right. You only moved the nodes, which has no effect at all.

You need to change the white wires to change the order. It is always executed from left to right. You only moved the nodes, which has no effect at all.

Lol that’s what they were doing, hehe.

hi! I’m having a similar problem, I’m adding combos but i have no idea how to set it up, any solutions?

This is my variant, i think this best and optimal way.

How would you get a Double Tap sequence to override an animation that’s been activated previously by the single tap function, with ANOTHER animation?

The goal is to have a “Roll” animation for a single tap Space Bar, then a “Jump” for a double tap. The thing is, once the single tap is activated, I can’t get It to run the “Jump” animation, even though I have Double Tap set up.

EDIT: Not trying to highjack the thread, I just thought it was relevant.

Hey, everybody!
I know this is an old post but I found a better solution to get this information (“Double Tap or not”) inside a macro and I would like to share it with all. That would be important for another person who finds this post!

Here is the code inside the Macro:

TapOrDoubleTap.png1062×293 58 KB
I set the time to wait for the second click as 0.25 seconds as the default value and exposed this variable setting as you want/need at the moment!

Here is the Macro appearance in the Event Graph:

So, this is my contribution to this topic!

The UE4 community is already amazing, but is our(developers) responsibility to make it better!

Great development for everyone!

I wrote a macro that I tested and it works! Yay. Feel free to make a MacroLibrary blueprint and toss this into your recipes. =^.^=

It’s a multi-tap macro, so you can do a triple, quadruple, whatever even 100 tap. You can also set the timer for how long you have to do it in case it’s a difficulty thing you gotta setup. Thanks for the inspiration Jamendxman3