Hi there guys, after almost 2 months of programming, digging into the source code, and banging my head around some solutions, i’m almost ready to release my own contribution (PLUGIN, sorry for the misunderstanding) to unreal engine, called “PaperZD” (Zeta D).
Because i’m working with a 2d dev team, we recognized the lack of 2d support for 2 things that are really needed IMHO: State Machines + Event System, just like on AnimBPs.

The solution we present is a mirroring of 3d AnimationBlueprints, the plugin comes with the following: 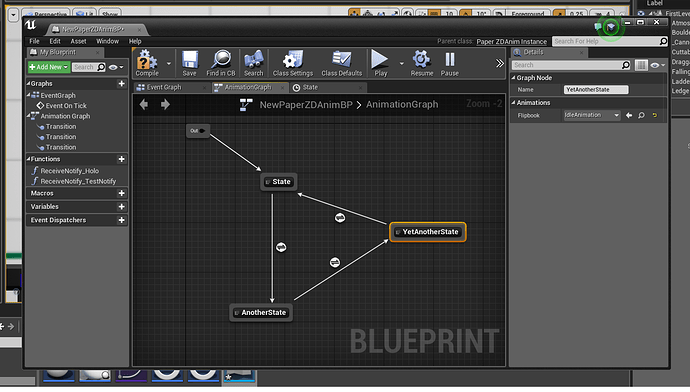 The Transition Graphs work just as any event graph: 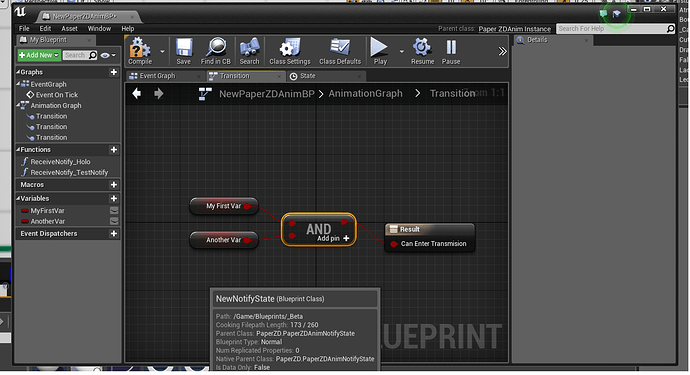 Some things that this system can do: 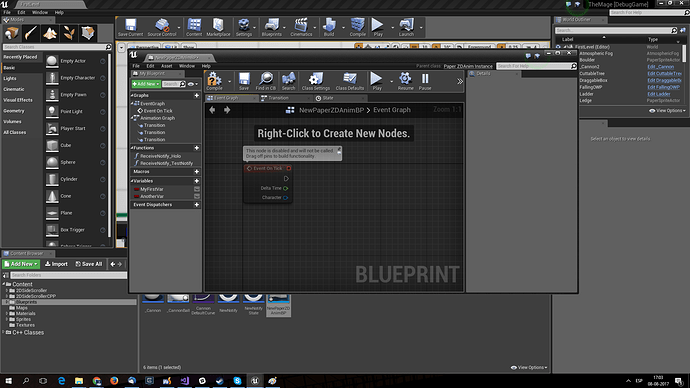 My DevTeam and I are right now using this plugin for our own game, and we are working on making it better each day.
The plugin will be finished in about 2 weeks (we are testing right now), and will be sold on the marketplace (will update here with the price).

I’m considering creating a Beta Testing team, so if any of you are interested on this solution and would like to beta test it, give me a call.
Cheers!

Great with improvements to the 2D capability of UE4!

When I read your own contribution to UE, I though it will be a new push to be accepted in the shipped version, but hey!, pretty sure that the people will found this useful, looks really good so far

Hey @HeavyBullets - What are your plans for this?

Edit: Should have read the bottom. Looks like you are going to sell it on the MP.

Hi guys, yeah, for the moment i’m thinking of selling it on the MP, i first would like to get some of my investment back (monetarilly speaking), the price for now is an issue of how much would be fair to charge for a plugin like this.
The option of pushing this to the repo didn’t really cross my mind, because i haven’t had any experience on the matter, if someone would be kind enough to explain to me how i would go around doing that, i would be very happy to think of a way to push this onto a future release for everyone to get (obviously giving that people who paid for the plugin, some form of extra feature, aside from support and maybe some custom needs).

What do you think guys? i’m very excited to add this, and it’s almost ready.

Edit: Maybe i could apply to Unreal Dev Grant, or something like that… make sure the plugin grows more, and give it as a push to the engine for free, any of you has any idea of this?

If you plan on merging this into the main UE4 repo it may be worth looking at this guide.

I personally have not applied for a dev grant so I cannot say how easy the process is. :\

Market place is also a good idea but It can take a while to get it up there. Look at Itch.io in the mean time.

thanks a lot, i’m gonna look at those sites… keep tuned, because the plugin is done, we’re just making sure it’s as bug free as it can be before release