Documentation half in Chinese

Ever since Epic decided to make their websites more “mobile device friendly” with the big bar at the top and simple black and white input fields, I’m seeing the documentation halfway in chinese. Does anybody else have these problems? It’s really annoying. sometimes it works right and sometimes it doesn’t.
Guys, when a system works: DON’T FIX IT!
Frankly I hate changes when there’s no problem to begin with, especially when they bring new problems

I posted a bug report but since they dont have a bug section “website” I post it here also in the hope of a quick fix.

It looks like you’re viewing the Chinese documentation. If you look at the address bar, do you see CHN in it? There is a drop down near the top of the page that allows you to switch the language.

The new header doesn’t have any control over the documentation site or what language you view there. Any issues you have with that are unrelated.

I’m sorry, this whole mess started with the new fancy bar at the top, I never saw Chinese before and I certainly don’t have anything chinese installed on my machine, so there is no way the website could have snooped anything on my machine and thought that I might be Chinese. Sometimes the whole Topbar is in Chinese and I have to reload a few times or close the browser before it comes back. And this picture I posted definitely doesn’t look like a chinese documentation, rather like a Frankenstein documentation. when you look on the left side, you see some links are half in Chinese and half in English. This is definitely not a healthy mode, it must be some sort of error

You are not insane, had the same issue last week using Chrome. The documentation was partially split between 2 languages. It’s been fine since then, though.

I have similar problem with AnswerHub, but it’s random - sometimes the top bar in in English, and sometimes it thinks that I’m Chinese. No idea how to ‘reproduce’ that, it seems really random

Can you guys tell me what language code you see in the address bar: 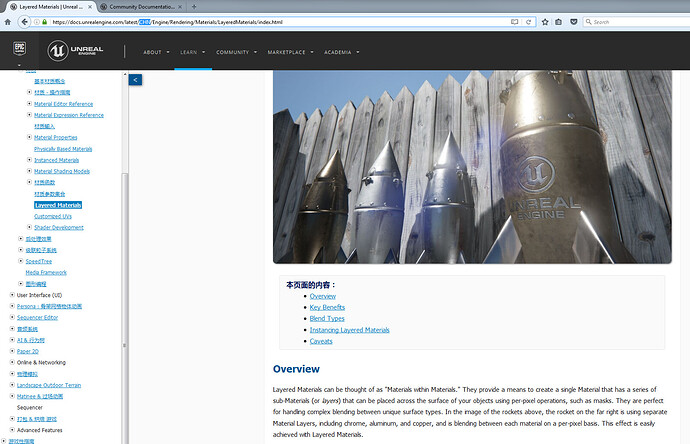 If it is not INT and you were expecting to be viewing the documentation in English, can you tell me how you got to the page? From Google search? From our search? From the header?

You can select the correct language from the dropdown: 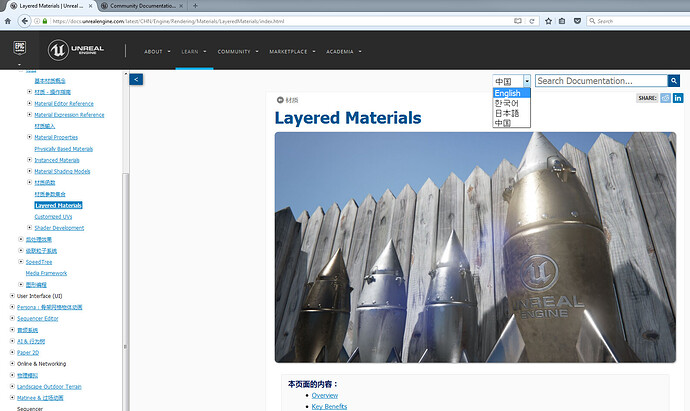 Here, if I google for UE4 docs, and click the links, the top bar of Docs is in Chinese, everything else is English. And there is no language selection dropdown, nowhere, only at UE main site, what it is “a bit” annoying.
Do you want to force us to learn Chinese?

It happens randomly. Here is a screenshot with the black bar at the top in chinese. As you can see in the dropdown I dont even have chinese installed on my machine and the URL bar shows INT. I click ctrl-F5 and it turns to english again. I got there from a boockmark which contains the following URL:

Yes, I have the very same issue. But I can’t provide steps to reproduce because it happens randomly. I think this is a caching issue.

I really do apologize for the site not working as well as it should.

The header being in the wrong language is a known issue that is being worked on and is a different issue than the documentation being the wrong language. I’ve run into the header issue myself several times so I understand your frustration with that one and hopefully we will have it fixed very soon.

The original post was about the documentation itself being half in Chinese, which appears to be due to viewing the Chinese page instead of the English page as not all pages are fully translated so you may see English mixed with Chinese on those pages. I’m still curious how people are arriving at these pages. If there is any additional information you guys can provide as far as how you end up on a documentation page that isn’t English, that would be very useful to know.

I realize that from the end user’s perspective there is no difference between these two things and they appear related, but as far as things to fix and who fixes them internally here, they are actually very different which is why I am making a distinction.

Ok Jeff, but the first issue is actually very easily reproducible. Enter this url: Bing Search - Unreal Engine go to Documentation tab and you will see that second link indeed leads to CHN and not INT, even though English is displayed as a current language in the top bar. Other links correctly lead to INT pages.

So it’s the search then. That’s kind of what I expected and is something we are aware of being an issue. I’ll see if I can increase the priority of fixing that.