Distance Matching: I gave it a shot—and now I need some help (but not with the actual matching)

TL;DR: My character snaps from one animation to the next while changing direction, as shown in the below video. Any thoughts?

I’ve been messing around with distance matching for a while, and I’ve finally gotten the majority of the work done. But I’m stuck with something that I thought would be easy to fix. Yet I’ve spent days trying to fix it and I can’t figure it out. I swear I’m missing something small.

This issue is shown in my recently recorded video: Distance Matching: Snap When Changing Direction. If the character changes the Principal Direction (which is essentially the Cardinal Direction) while in the Start or Post-Plant states, there is a snap when the animation changes to match the new Principal Direction.

My states are summarized by the picture I’ve attached. 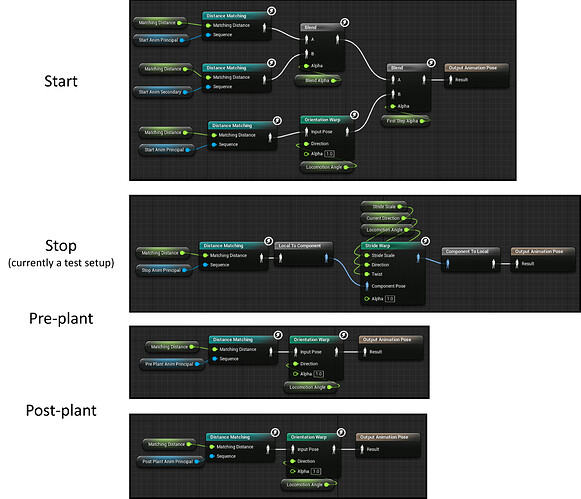 Does anyone have any suggestions for how I could resolve the snapping issue?

As you can see, I’m using the Strider plugin alongside a distance matching node I created. And I’m using UE 4.27.

(I realize there is still foot sliding, and also that the character has feet that are slightly beneath the floor’s surface. I’m using a poorly retargeted set of animations until I get better ones. But I will fix all of that once I resolve the snapping issue.)