I’m trying to have an interactive level map widget pop up when the player is standing near a globe object and then presses the space bar. The buttons on the level map will then teleport the player to different parts of the world when clicked on. I think I’m part of the way there, but confused over how to specify multiple criteria for the action to happen. Also, even the first criteria (player being near collision capsule) isn’t working.

I’m using the third person template and have set the space bar as the ‘Interact’ button in project settings. I then created an ‘Interaction’ interface with a function that I can reuse (since there will be multiple objects in the game the player can interact with in different ways). I created the Level Map widget BP and then the globe object mesh with a collision capsule arround it. The globe object type is set to Interactable.

On the third person character I have the following set up to run all player-object interaction events within the game. It should activate the object’s interaction event (if one exists) if the object type is set to interactable and the player is near the collision capsule and presses the space bar:

I then created an object specific interaction event on the collision capsule to open up the level map. 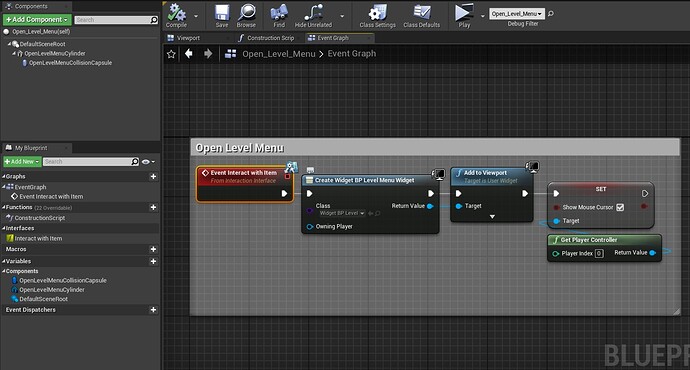 But nothing happens when I move the player near the globe object. The level map should pop up, but doesn’t.

Hope the above makes sense. Any help would be really appreciated, as I’m going around in circles a bit with this!

Ok, I think I figured out the issue, but leaving this here in case other people find it useful. The InputAction at the start of the event was set to ‘Interact’. I changed this to ‘SpaceBar’ instead and it works. So I needed to specify the actual key rather than the action the space bar is assigned to in the control settings.