I’m very happy to announce Dialogue Plugin, an editor extension that allows you to easily create dialogues in UE4 and UE5, through a custom node-based editor.

I’ve wanted to create a dialogue editor for more than a year now, and I’ve always felt that the ideal editor should be 1) node-based and 2) fully integrated, without the need of 3d party software such as Excel. Now I finally did it.

Feel free to check out the video and let me know what you think about the workflow: Conditions and events tutorial:
(this video is slightly outdated, you can now use “Get All Actors of Class” nodes in events/conditions) 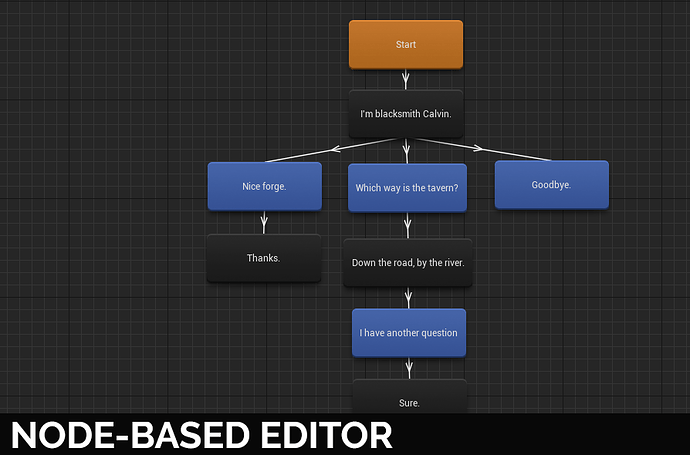 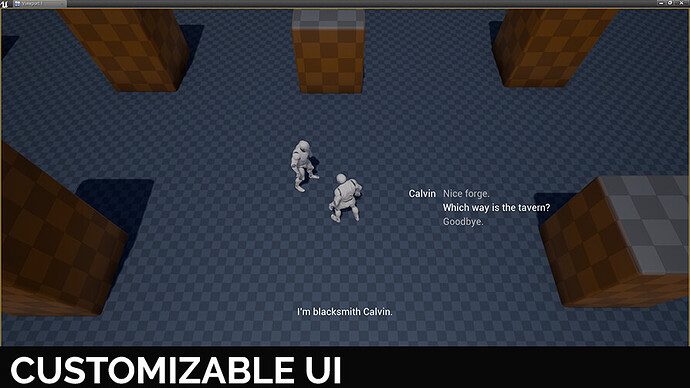 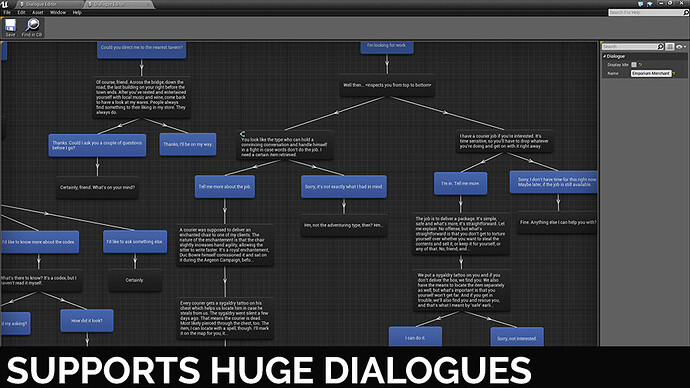 Hey @CodeSpartan - This looks like a winner what is the price?

looks very interesting to me.(creating a point & click adventure …)
how about cheking variables (so a dialogue branche is only activated when a certain variable is set. maybe the player has to get an object before …)
and how about using your system with multiple languages
price would be relevant, too

No submitted plugins have made it out of the Marketplace yet, I understand?

Could you add a basic 3rd person widget? (Out of the box solution please)

How would you do Localization?
How do the conditions effect branching, like in the witcher with decisions?
What versions are you going for currently?

Hi everyone. Thanks for your interest. I’m the second co-author of this plugin.

Could you add a basic 3rd person widget? (Out of the box solution please)

You mean the front-end dialogue widget for a 3d person template? Sure, the widget from the video is included with the plugin.

The dialogue plugin looks very promising. Is there an alternative way to acquire it before it gets released on the marketplace?

This looks great, hopefully up on Marketplace soon (any how long it takes to review?)

This looks amazing, it would love to get access to it asap trough an alternate source.

Day 1 buy for me. Looks clean, simple and to the point.

I understand that this has support for voice overs, however, could this drive a text to voice engine / plugin?

This looks very interesting. I do have a few questions, though:

I’m super excited for this one. I bought a dialogue system previously that was reliant on data tables and found it to be way too prone to error when moving writing over from something like Articy. Being able to do it in the editor like this would be fantastic!

Can you run Blueprint functions from dialog responses? If its a C++ plugin will the source be available?

Thanks for your interest in Dialogue Plugin.

Will you be able to trigger animations from within the dialogue editor, the same way you can trigger sound?

You can add your own fields to the events/conditions and add blueprint logic to process them. This way, you can trigger any events/conditions really - playing animations or granting items. The documentation already covers that, and we plan to make a video tutorial as well.

The video shows that each node has both a sound input and a voice-over input. What’s the difference between the two?

Sound field’s type is USoundBase and Voiceover is UDialogueVoice, both native UE4 types. You can use either of them for voiceover, UDialogueVoice is a bit easier to use if you have different NPC recorded voice depending on player’s gender or language.

Will you be able to set variables within the dialogue editor?

Not sure what you mean by that, but if you want to grant a player gold or experience, or do any other gameplay action, you can do it via events (see documentation link above).

I’m assuming you can also display the dialogue options in 3D space (like in Heavy Rain/Life is Strange) if you make your own custom widget for it. Is that correct?

All user interface in Dialogue Plugin is handled by a UMG widget. So if you’re familiar with UMG, you can freely customize its appearance and controls.

I understand that this has support for voice overs, however, could this drive a text to voice engine / plugin?

If you already have a text to voice code/plugin, you can use it in the UMG widget that displays the dialogue.

Can you run Blueprint functions from dialog responses? If its a C++ plugin will the source be available?

^Awesome, thanks :)! Sounds like this is the right dialogue system for my project, then.

Dialogue Plugin has been released today!

You can get it on the Marketplace.

Not sure if I’m just not seeing it, but how do you add conditions?

Not sure if I’m just not seeing it, but how do you add conditions?

Hi! We’ll be recording a short 3-4 min video describing the process of creating custom conditions and events in a couple of days, now that the plugin is released. But for now, there’s the documentation that goes over it at length.