I’ve been working for a few months on a new game project for which our team had to develop or use a dialogue system.
Turns out no solution satisfied us on the marketplace or elsewhere, thus here I am, making my own!

**User experience **and game-agnosticism are very important notions to me, so I designed this pure game-logic system in the most flexible and simple way I could : it is entirely made of Blueprint nodes. DOWNLOAD LINKS FOR UE4.20, UE4.21, UE4.22 BELOW
[HR][/HR] 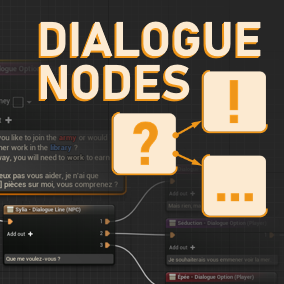 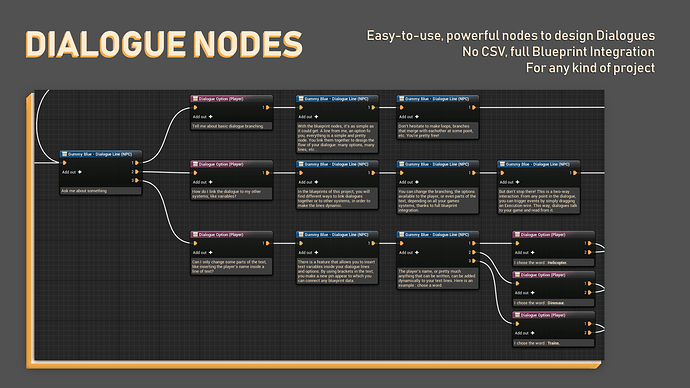 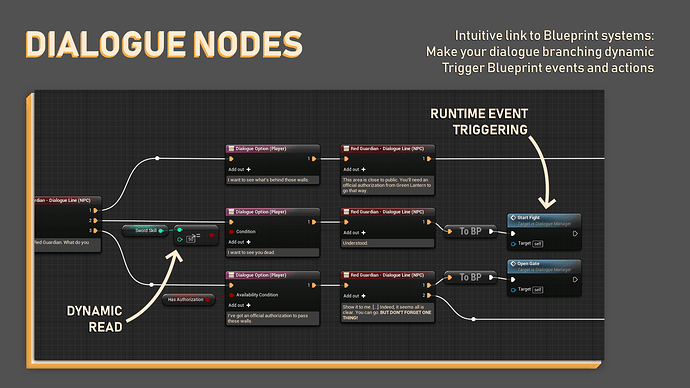 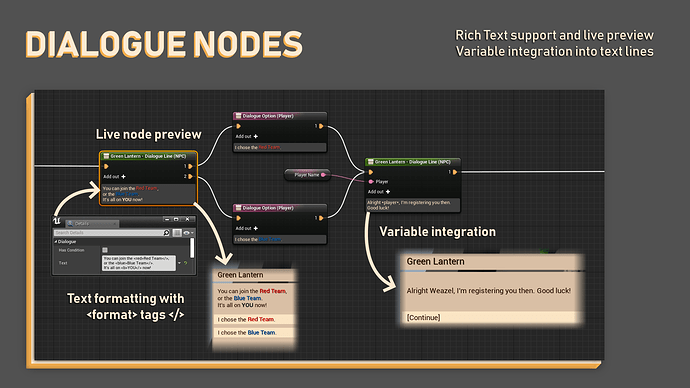 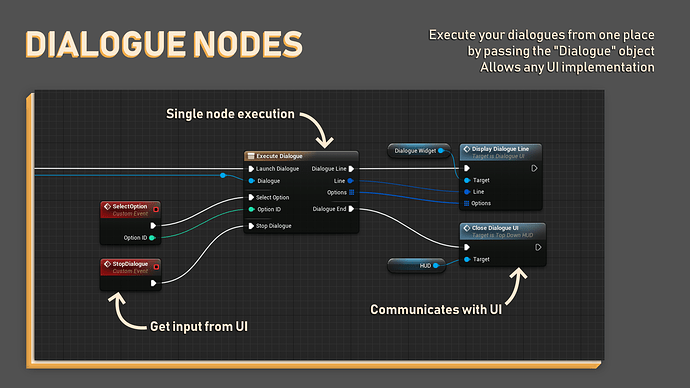 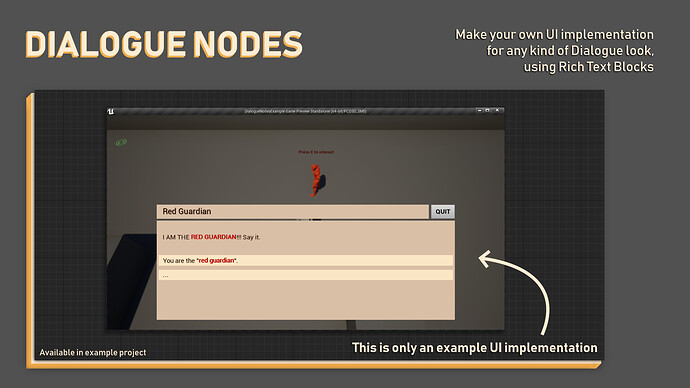 Important note: no UI implementation inside the plugin. UI entirely depends on your game project so it’s up to you to implement it. [HR][/HR]
Links:

[HR][/HR]As user-experience is at the core of my work, I will gladly hear about all your feedbacks and suggestions!

I’ve been working on it alone for a few months now (on my free-time) and I would like to have the point of view of other designers.

Now with an “Add out +” button to easily add outcome options

Not a big deal, but quite practical. 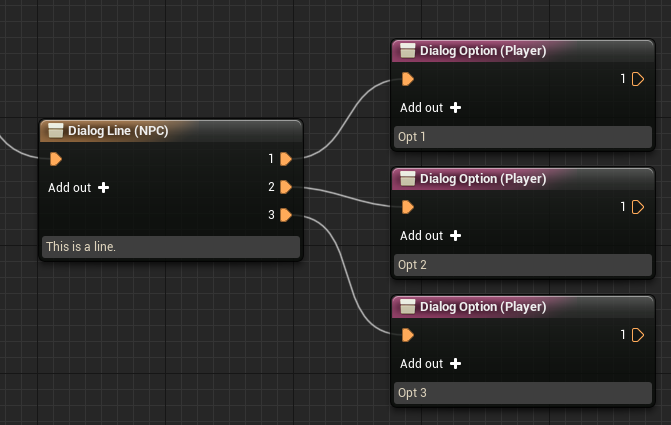 You can write text with tags that will automatically be detected and **formatted **in the rich text box of the node.
To do so, you will have to create a Text Style data table and select it from the plugin’s settings in Project Settings > Editor.

Thanks to that update, you can have as many text formats as you want, with all UE4’s RichTextBox possibilities (font, color, size, shadow…).

*Note: *you can’t add decorators like you would do to insert inline images or widgets (tooltips on keywords for example). I don’t think I will do it inside the editor’s UI, but it’s still possible at runtime.
Note 2: here you specify a Text Style data table for the editor display only. The text styles at runtime are specified separatedly, which allows you to have a preview set for the writing phase, and a runtime set for the real dialogue once in game.

You can add as many custom variables as you want in your text lines and options thanks to the brackets ]. Just write your [variable name] inside brackets and press enter. Then a Text pin is added to the node where you can write a value, or link anything directly from the blueprints.
As you can see in the example, the same variable can be used multiple times and may also be placed between < > signs to make dynamic text tags! (see previous update)

This feature also comes with few options making things easier with custom variables. When you delete all occurence of a variable in the text, the pin doesn’t disappear (it might be linked to something or contain a value). You can right-click on a custom pin to make it disappear, or you can also regenerate all pins to recreate all destroyed pins that still appear in the text.

This update also comes with a few minor bug solving that I won’t detail here.

Where can I get this?

Hi, I’m glad you’re interested but it’s still a WIP though.
I can’t deliver it right now as main features need to be done.

This is pretty awesome actually. I really love that you incorporated RTF/B and variables directly into the node. That would speed things up quite a bit. Keep up the great work!

Can be placed on existing Blueprints.

Have you any plans to integrate your system into Behavior Trees and AnimBP?

Thanks for the feedbacks!

I quickly checked and it seems to work with AnimBP, but I need to test it further.
I don’t have any plan to directly integrate it to Behavior Trees as it is quite different from BP, but you can still make bridges from BT to BP and then use any variable/condition in the dialogue branching.

Maybe things will be clearer when I release the update for executing the dialogue. Until now, I’ve only been working on the dialogue design, which is stored in a Dialogue object. It should be out soon, but it’s quite a bit of work too.

Sidenote: as I see some great coders are here, does anyone have an idea on how to change the color of the pin connections?
I made a custom exec pin (orange one in screens) but I can’t manage to edit the connection color, as it is hard-defined in the graph settings. Any way to inject new setting?

It is composed of five parts. The three to the rights are ways to give information to the dialogue. The two to the left are events fired by the dialogue when necessary.

I recommand to make a displayer class (maybe a widget blueprint) that will properly handle every dialogue execution, then pass it relevant Dialogue objects from the blueprint that need to execute a dialogue. This way, you can define your own UI design once and use it everywhere in your game, with a direct and strong link to blueprints.

Hi there, I made some progress since last update since January! Most of them are bug solving and optimizations, but I added few visual and practical things too.

*Note: *You can use [text parameters] inside metadata parameters too! This allows you to change their value dynamically depending on game. 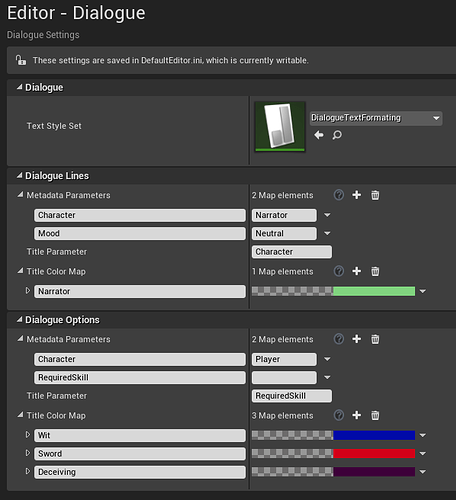 I think I am slowly reaching a milestone where I might be able to ship a first version of the plugin. I will let you know and as always I am fully opened to feedback!

I have to say this is looking amazing. Looking forward to get my hands on it for my game!

After a while (I just moved to China for work), I’ve been working again on my dialogue plugin and I’m proud to say that the first version of it is ready !
The team I’m in is going to use it on our project to get some fast feedbacks and solve the first bugs + make the first improvements. As is it an user-experience plugin in the end, I will make it evolve with user feedbacks.

However, I will soon make it purchasable on the MarketPlace for 24.99$. According to what I’ve seen and tried, I think it’s a fair price, also considering that it will evolve to follow the needs.

Small update though, since last time:

Hey @CraftyWeazel - The PDF documentation is empty for me. I have tried to open it with a dedicated PDF reader as well as Chrome and Edge.

Same here as HeadClot. This looks like a really amazing plug-in, I’m exited to get my hands on it.

Is it currently possible to pass more with the OptionStruct than just the line, visibility, and availability? For instance, if I want to pass a montage or an image when an NPC response is sent to the dialogue widget is that possible?

Hey, I updated the documentation link in the original post. I don’t know why but the PDF wasn’t correctly imported to Google Drive the first time. It should work now

@TBWright With LineStruct and OptionStruct, you can pass text, sound, dialogue wave and metadata (plus the availability and visibility conditions of course). So you can make a metadata entry called “image” or “montage” and supply the name of the asset you want to use here. Then in the widget implementation, you can switch on that name and if it corresponds to anything in your database, then display it.

It would have been better to let users define their own struct to be passed with lines and options, but I didn’t find a way to do it inside the editor. Maybe in a future update though.

Hey, I updated the documentation link in the original post. I don’t know why but the PDF wasn’t correctly imported to Google Drive the first time. It should work now