Detecting which collision volume is intersected most

I’m stuck at a problem at the moment, and I hope there might be someone who could help me find a solution and tell me if it is at all possible. Being still relatively new to blueprints (and UE4 in general), I honestly have no idea how to approach this. 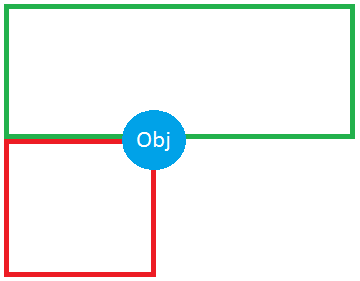 If there isn’t a “coverage” option for the volumes, this may be another alternative.

Your blue Obj has multiple sensors on it, and based on how many are “lit” will tell you which volume it is in.

Thanks for your answer Yggdrasil!

“Coverage” is a much better word for what I was trying to say; return the collision volume with the highest coverage of the object.

I do realise that if no other true options exist, I may have to resort to some kind of workaround similar to the sensor method that you propose.

Assuming I have understood what you meant correctly, this does pose a potential problem. I will admit that it is something that would be a rare problem, and that it can probably be counteracted by increasing the density of sensors… although increasing the amount of sensors would likely be less than ideal from an optimisation perspective. Time for some more MSPaint.

Again though, can probably be counteracted with more sensors, but which in turn isn’t the best in terms of performance/optimisation. Or am I completely misunderstanding?

Yes, that’s exactly what I meant. You even took it that much further by putting the red volume between the sensor points. Nice!

I don’t know much about it personally, but there is a Sweep option that seems to gather good results. I think it gathers data on the move instead of a one-hit wonder scenario.

I guess my mind is better suited to finding problems and pitfalls than seeing the actual solutions… although that has its uses sometimes.

Using the sensor method isn’t ideal, but if I can’t find another solution I’ll use that as my fallback. Still better to have one option than none at all. Honestly, it hadn’t occured to me to use a sensor system befre you mentioned it Yggdrasil. Thank you for you help thus far, it is much appreciated.

I wasn’t aware of any Sweep option, so I’ll have to look into that sometime soon. For now I’ll wait and see if I stumble upon some better alternatives, and remain open to other suggestions as well. In the meanwhile I’ll try to figure out why the calculations I’m working on now are going completely bonkers… but that is a subject for a possible thread in the near future if I can’t get it right.