I am currently creating a behavior tree for a simple enemy that will follow the player when they see them. I have searched up how to switch states in a behavior tree, and I think I mostly have it down. I feel like there is some small thing that I am missing.

I originally created a script for the AI character in the event graph that would set a boolean (playerFound) to true or false depending on whether the player was seen (it did affect the behavior of the enemy, it would just print whether or not the player was detected). It worked just fine, and I copied the code over to a task in the behavior tree (which also has a key called “playerFound”). 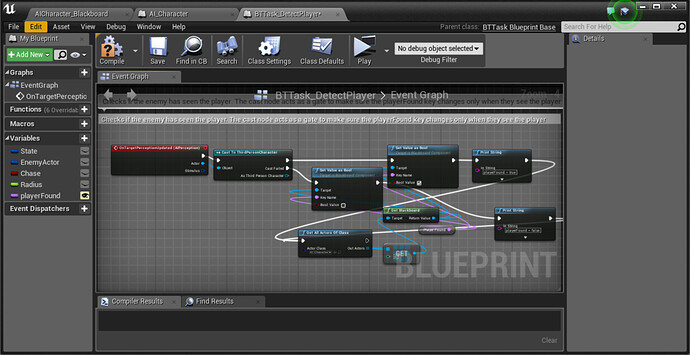 For some reason, the enemies cannot see the player. I keep getting notified that they are idle.

The code that I copied from the event graph is in the detect player task. I have provided other pictures just to give a better overview of what I am trying to accomplish.