Good Afternoon to you all!

Ive made a Watchtower mesh and made it a “Destructible Mesh”. Now i want to be able to Explode the Watchtower when i press “KEYBOARD F” for example…

I made a Blueprint by Right clicking on the DM and “create blueprint using this” and ive set an Event for the Watchtower DM “On Middle Mouse pressed” which linked to “apply damage”, I tried it but when i play the game and press Middle mouse, nothing. The apply damage node spun me out a bit. I set the Damage to 100 and the Force or impact whichever the other Float setting was, but i cant understand the location of the damage and the Angle or direction using Vectors.

I posted on the answerhub question you asked as well but got a couple of things wrong since I hadn’t set it up in a while.

Here is the way to set this up now.

What you’ll want to do is setup a BP with two components.

For your Destruction mesh in the details panel do the following:
Simulate Physics = Unchecked
Simulation Generate Hit Events = Checked

For the radial Force:
Set your Impulse and force strength
AutoActivate = Unchecked

Now that you have these setup set the following up in the event graph and on key press you’ll see some destruction. You may need to set higher values for the radial force to see the explosion pushing the destruction bodies apart.

If you have any trouble or questions feel free to ask!

Worked a charm, I replaced the key press part with an “overlap” event. So you can run into it and smash it to pieces muahahah

I could get used to this Blueprint stuff.

No problem at all! Glad you’re having fun with it and getting some fun stuff happening!

At this point I’ve taken the demo room from the Content Examples and now have a hallway with a bunch of different setups from my time messing with DMs and trying to get specific effects. I’ve still got more I want to do with it but that all comes down to free time and having fun at the same time.

If you get anything cool happening feel free to post. I’m always curious to see what fun things people are doing with DMs and physics!

There is one thing i could do with a hand on… I need to delete fractured mesh chunks after a second or two, I have tried but with no joy

I set a timer for 2 seconds after applying damage, and then Destroy the actor but it deletes it before its even fractured lol im really new to this. as you can tell!

Scrap that, ive devised a way of doing it, Which is the following:

Couldnt logically think of any other way. Id like it to turn to dust so will add a particle emmiter to it later and try to make a sort of Ash particle. Ive not used the Particle editor yet though. 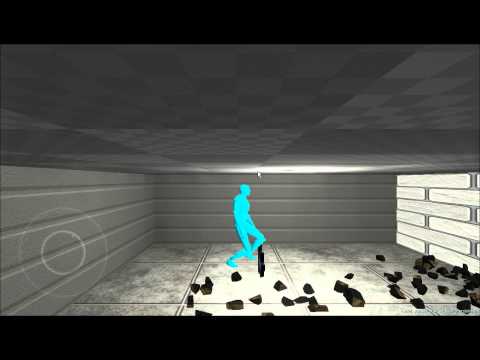 Forgive the Frame rate, Microsoft expression has got to be THE worst capture software imaginable!

My machine specs are: