Over the last four months I have noticed that my C drive seems to lose GBs of storage space for inexplicable reasons. I found this very strange because I not do not save resources to my C drive (I always work from the D drive). I usually end up removing unused applications in an attempt to reclaim space, but something keeps eating up GBs regardless.

Even though it seemed to start when I started using UE4 I didn’t think it was related,
nonetheless, I did some investigation.

Upon further investigation the culprit seems to be the folder:
C:\Users\admin\AppData\Local\UnrealEngine\Common\DerivedDataCache.

I am still using the same version of UE4.5 since installing it on the 4th November
and have not downloaded anything from the market place.

Any idea what is going on in that \DerivedDataCache?
I am concerned because at this rate of consumption I will have no disk space by this time next month. 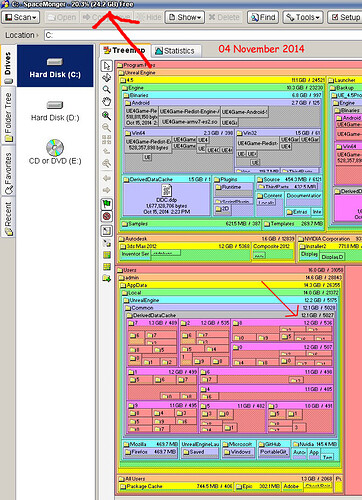 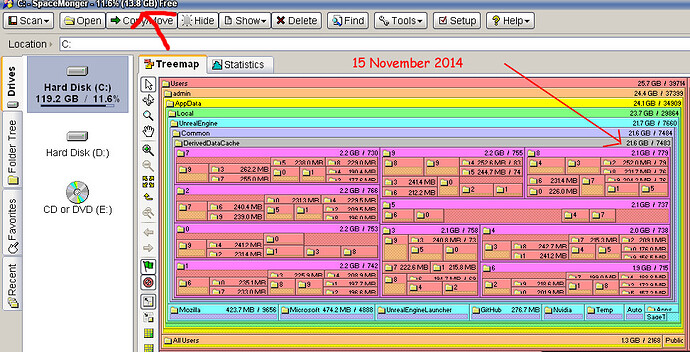 there is the related documentation about DerivedDataCache in case you missed it: https://docs.unrealengine.com/latest/INT/Engine/Basics/DerivedDataCache/index.html

In short, it stores the assets and shaders in expanded formats, different for every platform and version, and these take up much more space than the source format (that is .uasset). It is generated automatically, and you are safe to delete it. When you open up your project these will be generated again. By default it’s shared among every project, and every time you open a project it caches the assets there, so after a time can become quite large again.

Frotunately you can set up the path where engine stores the DDC, for example in your project directory (see Shader cache section):

And here is a related question too:

I hope it helps!

I am at 25.2 GB after 8 weeks and it just keeps growing and growing: