Currently I’m faced with a problem where our character’s default pose is creating issues for a joint-based simulation in engine. Although the simulation behaves as expected most of the time, there are instances where the joint chain attempts to “pop” back into to its initial position (or better said, its bindpose) when certain animations are played. It’s almost as if every time certain animations kick in, Unreal restarts the simulation from the bindpose which is not the intended behavior we’re after.

Without going into any extraneous detail about our specific character, what I essentially want to do is eliminate any of the nasty “popping” every time the engine switches from animation to simulation for our weapon chain. For clarity, below is roughly what our skeleton hierarchy looks like (the image illustrates our skeleton in Maya, however, this skeleton exists in Unreal as well): 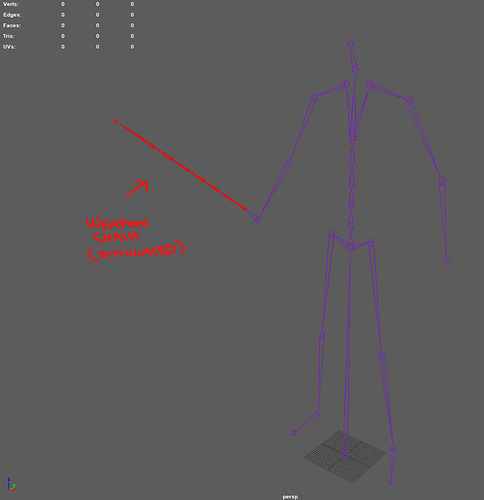 In the recent past I’ve tried resetting the bindpose to see if this eliminates some anim-specific problems but due to the animation systems we currently have implemented, changing the default pose merely solves the issue on the physics-side but not on the animation-side. In other words changing our bindpose is somewhat out of the question. With that in mind, what I’m thinking is if it is possible to “pre-simulate” our weapon chain before the character is shown on screen or if it’s possible to retain our bone data somehow so that the weapon is always in the right position as it transitions from animation to simulation back to animation again. Any help is greatly appreciated. Thanks!