Hey guys, I want to share this thing I’ve been working on - I never really intended to end up going this far with it but I’m really enjoying learning how UE works so going to see how far I can take it. Started off with just trying to get an old car mesh I made a couple years back working as a vehicle in UE then kept adding and refining stuff, then ended up making a new car, heh.

I’m working in this ‘low poly’ style as it means I can quickly add new assets, which is important to me for not getting too stuck on one thing and getting bored. I say ‘low poly’ but it’s really more just faceted/vertex coloured I’m not working to a strict polygon limit.

Before now I’ve never done any sort of programming or scripting, other than high school over 10 years ago where I probably copied my neighbor’s work! So for me getting even these basic things functional is really exciting. It’s something I never thought I’d be able to do and thanks to this amazing engine and community I have been able to learn so much.
I’ve done a fair bit of 3d modelling over the years to only as an amateur.

The main influence is Interstate 76, which also had some pretty sweet low poly cut scenes. I’m also hoping to get some of the feeling of exploring the world that you get in Shadow of the Colossus and maybe incorporate some extra vehicular platforming/climbing puzzles and basic survival elements. But for now I’m trying to get some more basic functionality down and polish it up. 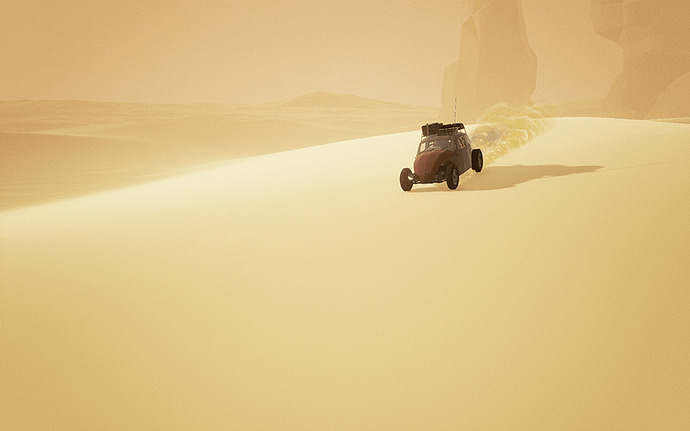 Thanks for taking the time to read/watch!

Trying to tune the handling a bit. Getting somewhere close to fun. In the 4.8 preview things feel better but maybe it’s my imagination?

I actually love the aesthetic concept you have here. Lots of potential directions you can go with this kind of thing, everything from a Journey esque travel to the more expected racing/mad max to the less expected turn based racing/combat (See Darkwind/Car Wars). Either way I hope you stick with it because as a starting point you’ve got a pretty good looking vibe going.

Agree. Like the aesthetic and the game looks immediately fun.
I frown on levels that overuse dust / fog, but this just works so well!

I immediately thought “mad max!”… this looks like it can be so much fun

Looking good, I can see myself spending hours driving around that vast desert. =P

@TK-Master: Couldn’t agree more with you

Thanks a lot guys! Yeah I love Mad Max for sure there are elements of that in there! I don’t want to go as crazy with the vehicles and bondage as Mad Max but the feeling of the chase at the end of 2 would be something I’d love to hit. The vehicles will be mostly pre-1960 European and the setting is likely to be a desertified English Channel, so things like the big rocks stacks that I have at the moment will be reduced dramatically once I start working on the environment proper.

I’m working on an enemy vehicle at the moment so there’s something to shoot at other than barrels. Once that’s in and working I’ll release a demo so I can get some feedback.