Daz to Unreal Bridge not working

I am attempting to use the Daz to Unreal bridge, but it is not functioning correctly.
I have downloaded the Daz bridge and installed it to my UE4 engine, v4.25.4.
When I start up UE4 engine, I create a new project, basic 3rd Person.

Then, I attempt to enable the DAZ to Unreal plugin. It prompts to restart UE4. After restarting UE4 and attempting to load my very basic project, it pops up with a window telling me:
The following modules are missing or built with a different engine version:
DazToUnreal
DazToUnrealDeveloper
DazToUnrealRuntime

Engine modules cannot be compiled at runtime. Please build through your IDE.

I have searched all over Google, and none of the “solutions” fix this for me. I basically cannot use it at all.
Does anyone have any insight to this?
If I installed the Daz to Unreal via the Epic Games content, shouldn’t it have everything required? 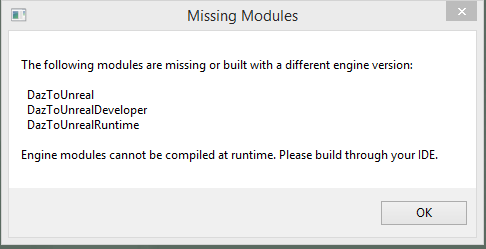 Follow-up:
I have recently tried two different “manual” attempts, found on youtube, but they do not seem to correct the issue either.
Also went through uninstalling/reinstalling the module but that does not seem to resolve it.

I am having exact same issue. I even uninstalled both daz studio and unreal engine and re try the whole process several times, but same result. It seems like the engine version is somehow stuck into the plugin setting that can’t be deleted by just uninstalling the plugin or removing Unreal Engine Install Location variable at daz central.

Anyone else has solution to this issue? I am about to format my windows just for this.

I believe it has something to do with the updated/current builds of UE4 vs. the version of DazToUE4, according to the research I have done.
Apparently, the DazToUE4 module/plugin has not been updated for the newer versions of UE4. Also, I am not able to install older versions of UE4 any longer, whereas in the past there always seemed to be options to have various versions of old/new UE4.

I hope they rectify this soon, because I spent money on this plugin only to have it not work. I am not able to import any of my Daz work into UE4, which is about to cause me to hang-up UE4 altogether, along with other inherent UE4 issues such as failures to load textures/meshes on character models.
Perhaps Unity offers alternatives that work.

Other than that, it has been suggested that I use Daz to Blender to UE4, or some variation thereof… which is not really conducive to the time I have, due to not knowing how to use Blender because I’ve never used it. So, basically, I would have to learn an entire new program/interface just to try to import things… highly frustrating. My projects are at a standstill due to this issue and there does not seem to be any hope on the horizon.

I have not yet tried UE5, for various reasons, but I would assume the same issues would exist.

This is an old thread (and I hope youhave found a solution before now) but in the event that the information is useful to you or others, DAZ to Unreal Bridge is presently working across a wide range of UE versions. I am having no problem moving scenes and characters from DAZ to UE5.02. However… there are a couple of known problems and easy traps to fall into.
David Vodhanel has produced the only authoritative guide - Daz To Unreal – Manually Updating – David Vodhanel and, as he writes the code for the transfers, other info on YT can be way out of date.
A couple of provisos:
1/ follow his guide precisely - do not mix and match - you will need his plugin code at DAZ Studio and UE. If you are getting skeletal errors on import, you may have a mismatch of code.
2/ there are basic differences in mesh and skeletal forms (between DAZ and UE) which may give you a quality hit in UE, or make animation sharing difficult. Some of these issues are still being worked on and do not have solutions at present for UE5. However, I am using David’s rig and animation retargeter to give acceptable results.
3/ Some clothing/props/hair/morphs associated with DAZ characters can create chaos in a bad way when imported. You may have to do surgery in DAZ to remove wierd bones and then rework clothing in UE.
David’s guide in the link above deals with a range of these issues, but it helps if you have had a bit of experience in the area.
My own experience is that, with a bit of effort and a lot of caution (with assets prepared by others), i can move assets over from DAZ to UE5.02 and use in cinematic environments without difficulty. However, the learning curve was steep.
Cheers
Peter