I’m currently working with a large number of DataTables, being able to store and access DataTables in variables would make life a lot easier in Blueprint.
I’ve seen people request the feature once or twice before and just want in inquire whether there might be an ETA for the feature?

I’m with you! Requested this one a long time ago([Request] Data Table variable type - Blueprint - Unreal Engine Forums). Still waiting! Datatables are a powerful resource that are relatively untapped in Blueprints. I hope we can change that soon!

You could create a macro/function that creates arrays based on the datatable’s underlying struct structure.
The function then simply populates an instance of said variable…

That’s a good workaround, thanks.

+1 for this feature request! the selection dropdown should show the row names of the data table.

+1
I’m having difficulty understanding how I can best set up my BP’s to allow me save all active/passive and weapon abilities in different data tables.
Right now how I see it I have to create an enum with the same names as the data table rows, link them up in a macro so that I can easily select and add abilities/upgrades…
But then I have to change

i think the reason why they don’t make DataTable into a Blueprintable class, is because blueprint code cant handle changing a structs type at runtime. it would still be usefull for actors placed in the editor though.

You could create a macro/function that creates arrays based on the datatable’s underlying struct structure.
The function then simply populates an instance of said variable…

How do you produce this workaround? Are you breaking the struct of a datatable then adding that into an array?

+1 for this feature. Looking like I’m going to have a lot of DataTables as well being able to have functions accept them as inputs would be very useful in blueprints.

+1 for this feature. Looking like I’m going to have a lot of DataTables as well being able to have functions accept them as inputs would be very useful in blueprints.

For reference, there is a FR in for DataTable Variable types here. You can track and vote on it from that site.

How would it work, however? When you use the DataTable BP nodes, the nodes update themselves to properly reflect the struct type used by the selected data table during compilation time. How would you read the rows of a datatable variable without knowing their row type ahead of time? It would be only viable for switching between multiple dataTables that use the same row type.

The FR that Alexander mentioned is claimed fixed in 4.15. In the meantime if you are compiling engine code, you get this functionality as shown here: 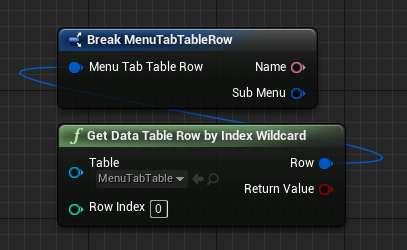 Hi all! I wanted to share some of our blueprint table functions with the community. As with anything not supported by Epic, use at your own risk. The C++ blueprint function library is attached. Data Table as a Blueprint Variable Epic claimed this...

I HATE to bump something this old but it doesn’t warrant a new thread either. According to: Unreal Engine Issues and Bug Tracker (UE-23282), the issue is fixed as of 4.15. But what about CurveTable? For instance, I’m trying to store a CurveTable of damage and rates within my Projectile blueprint (the values vary at different ranges). I’d like to be able to pass the Projectile as an argument to my BP_Destructible which implements a Damageable interface. Within that blueprint, and the implemented method specifically, I’d like to lookup the damage value from the CurveTable of the Projectile that’s passed in. But as far as I can tell, I’m unable to make a variable within my Projectile BP of type CurveTable. Any ideas?