I just discovered that instances in Unreal are white dots, instead of the small house.

And if you select more than one of those dots at the same time in the World Outliner, you don’t see the mesh assignment nor the materials assignment.

But worse, even if click just a single instance, and update the original static mesh, with a Datasmith import you don’t see any change until you click the little yellow icon next to the material for each and every instance.

Have I misunderstood something here? I have about 100 of these lights, how do I make all instances respect the updated source mesh in one click? 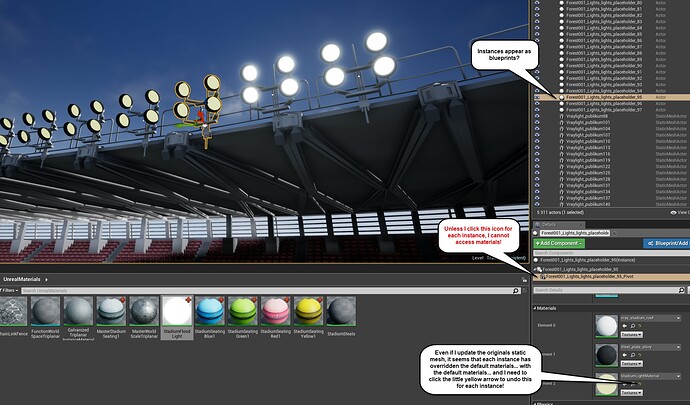 Ok, the reason this is horrible in Unreal is apparantely documented here:

And the fix in 3D Studio Max is simply to use the “reset pivot” button. It appears that some setting of the Forest Pack plugin creates these custom pivots, which we’ll try to avoid in the future.

This is documented in greater details here:

The exporter should bake the pivots if all instances share the same pivot. If one of the instance in the list have a custom pivot, then that situation will occur.

If you could give us insights on how that scene was set up we could see if we could improve it, especially with forest pack entities as we are rewriting our support of this at this point.

My coworker set this up, and one of his forest pack set of objects imported fine, and the other required the “reset pivot” fix, so I’ll try to get him to see if he can figure out what the difference between the two occurrences were and see if he can post a description about that here.

However, we still need to “collapse” all forest pack objects by using the “instanciate” button because otherwise Datasmith just hangs on export (in our experience), so adding the need for “reset pivot” to that procedure really isn’t much more work.

EDIT: Strike that. It seems that if you reset the pivot of objects that don’t have custom pivots, they get placed at the origin, which isn’t desirable at all. So in effect, we need to export, check for white balls, and then reset the pivots for each object that Datamisth generates those white balls on. We weren’t even aware that Max could have “custom pivots”, so maybe there’s a script to fix that.

However, we still need to “collapse” all forest pack objects by using the “instanciate” button because otherwise Datasmith just hangs on export (in our experience), so adding the need for “reset pivot” to that procedure really isn’t much more work.

This is rewritten entirely for 4.22. Still i am happy to look at one of your scene an see what is going on. Can you ping me at pierrefelix.breton@epicgames.com ? A wetranfer link to a 3ds max archive would be good.

Just sent you a mail (although I sent you a Dropbox link and not Wetransfer, which I hope is still fine)!