I’ve been trying to import in a scene from C4D to UE4 through Datasmith. The problem I’m currently facing is regarding objects that have been created through loft which are the columns. The columns seem to be ‘empty’ facing the camera when looking at it front on, even when rotating around it. Is there any setting I can change to correct it either in C4D or UE4?

Any help would be great!

Invert the normals or assign 2 sides to the material

The issue you see is caused by the face normals pointing in the wrong direction and the backface culling doing it’s job by deleting all the faces that face away from the camera so they don’t have to be rendered.

Take a look at your Loft Object to find out if the option “invert normals” is checked or unchecked.
Check/uncheck it to fix the issue on this model.

There is also a backface culling option in C4D that allows you to preview the result.

But if you wanna understand what is causing the issue:
The Loft Object takes all the shapes you feed it with and processes them in a certain order, bottom to top.
Now if you reverse this order of the spline objects top to bottom in object manager, it will reverse normals.

If you ask me, you really should convert your models and optimize them properly before exporting them into a game engine.
Just because Datasmith can do the converting job for you doesn’t mean it will always do it exactly the way you want it to be.

By exporting parametric objects you don’t have any control over the result and important stuff like UV mapping, shading etc.

Thank you both for the explanation! It’s helpful to understand the issue for the future.

I realised the invert normals were unchecked and checking it made it okay when importing in to UE4 yay!

Kraid, by converting the model do you mean to a fbx format? What would be the best way to optimize them in your experience?

Sorry for the many questions. I’m still new to this pipeline and would love to learn and understand more from you guys!

Converting means turning objects like Loft Object into editable polygon objects.
This can be done either by pressing ctrl+c, using the button on top of the left sidebar (object has to be selected in object manager) or right click on the object in object manager and select “convert object” from the context menu.

If you use the context menu, you can also use “current state to object” to create a polygon copy of your object and keep the original loft object as backup.
Sometimes this can be helpfull if you need to make further changes on the object later on.
But make sure to organize your objects well and delete all the backup objects before exporting.

Usually i have a work file and an export file, which is a copy of the work file minus all the backup and preview objects.
Also i like to export them “game ready” with all the smoothing, uv mapping (texture and lightmap UV), optimizing and triangulation done.
That way i don’t have to rely on any of the automatic features and have control over every aspect of the model.

As for optimisation just take a look at the resulting object of your loft object after you converted it.
There are 3 objects for your pillar, the pillar itself but also the caps.
Since in your scene there is geometry above and beyond every pillar, these caps will never be seen, but they still might get rendered ingame.
So in this case it just means you can delete these two cap objects.

However if they would be seen ingame, you would merge them with the pillar to a single object and edit the UVs and materials to cause as few drawcalls as possible.
Usually you select the meshes use right click “conect + delete” and then the optimize command (right click in the viewport while in polygon, edge or points mode and select optimize from the context menu, or top menu: Mesh>commands>optimize, or shortcut U~O,U~shift+O).
The optimize command in default configuration will delete all unused points (from deleted faces) and weld points that overlay each other (e.g. from connecting objects like caps to the body).

Use the option “Save project for melange” in Cinema 4D, that will automatically convert all parametric objects, and mograph stuff into editable solids/polygon objects, and write some more infos into the scene for Datasmith.

Datasmith uses a Direct workflow for Cinema 4D. This means that to get your Cinema 4D content into Unreal using Datasmith, you need to:

The Unreal Engine, like most real-time renderers, automatically culls triangles that face away from the camera in order to maximize performance. However, Cinema 4D can render geometry with or without this backface culling . Depending on how you set up Cinema 4D, you may not be used to taking the facing direction of your surfaces into account. If your scene contains single-sided geometry for which the surface normals of the faces point away from the typical viewing direction, that geometry may seem to disappear when viewed from certain angles in the Unreal Engine.

Thank you both for the amazing tips - they are super informative and helpful! I will definitely have a readthrough of the documentation for C4D to UE4

I think next steps would be to figure out the UV maps now that the importing is more or less good!

Just for example i created a mesh using the loft object in C4D. 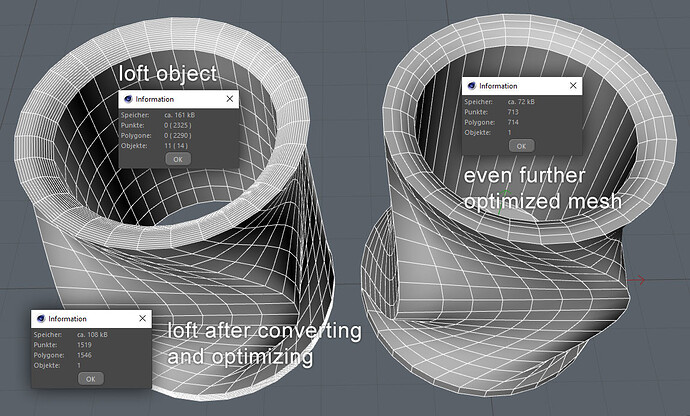 loft_optimizing.jpg1147×693 207 KB
[/SPOILER]
(note that the object information in C4D is still counting quads and the caps as ngons)
If this shape is exported as loft object, it will have about 4522 triangles in UE4.
Also the inside cap will be invisible due to reversed normals and backface culling.

If it’s at least converted to a polygon object, caps connected, optimized and normals aligned,
you get a total of 3034 triangles.

Now if you take it one step further and delete all the unneccessary edeloops,
you can bring this mesh down to 1422 triangles.

This is less then 1/3 of the polycount of the unoptimized loft object export and only half of the slightly optimized one.