Moved from Unity to UE this year and long story short have been trying to merge the Top Down Controller starter project with traneks GAS documentation (GitHub - tranek/GASDocumentation: My understanding of Unreal Engine 4's GameplayAbilitySystem plugin with a simple multiplayer sample project.) to start a multiplayer ARPG project.

Currently struggling a bit with dashing towards the mouse pointer in stead of “straight ahead” relative to the characters current rotation.

I’ve changed the example dash function to the image below. If I connect the casting to BP_TopDownController straight to the “Apply Root Motion Constant Force” and use the “Get Actor Forward Vector” as the World Direction the character dashes forward as intended and replicates properly to all the clients.

However, using the same logic from the Character Controller with “Get Hit Result Under Cursor by Channel” and passing that along to the “Move on Server” event the character just dashes straight up/north from the spawn position and starts shaking until I issue another move command by clicking anywhere. 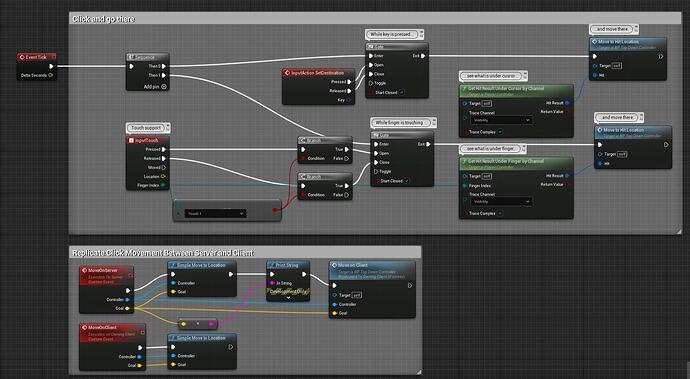 Could it be because the GAS Ability doesn’t know who “player index 0” is and passes along the incorrect mouse position, or is it due to something else?

As an aside, if anyone have any pointers or some tutorials where GAS has been used in conjunction with multiplayer and top down controller it would be appreciated.

Could it be because the GAS Ability doesn’t know who “player index 0” is and passes along the incorrect mouse position, or is it due to something else?

Just add logging to this or print out values to understand how it works.

I’m not a pro with GAS, but most of the time got in trouble without checking that the server is valid or because something works only on the client-side. You have to use debugging a lot otherwise you will spend much more time to find the issue.