Damage problem: 2 hits (or more) and knock back

I need a little help on a basic-noob question.
I found some answers right there, but not solved my problem. Here it goes:

I have a Damage Bluperint, where I set a collision who will take damage from player when the charatcer touch it. Basically, I’ll use on spikes and other kind of props (like these basic things).

So, I did a scheme to cast damage on my character. It’s ok. But, when my character touch the spike (damage collision), it take two, three or four hits per time! Even when I touch a single time, I take various hits.
I need, too, a kind of invincible system (for some seconds) after taking damage, but I have no ideia of how I can do it.

Here’s a print of my Blueprint. I’ve made a kind of knock back, too.
Please, help me. 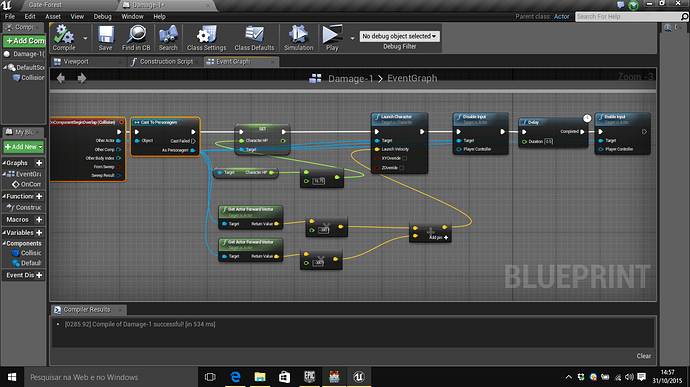 Hi man , seem you just want a timer to take only one hit in time.
I dont see all the blueprint , so basically.
Set up a Variable and pin it to a Branch, at the event damage you check the value of variable, if is 0 you continue applying the launch and the damage, in the end you set the variable to 30 (for example).
If the variable you checked is not to 0, subtract -1 at the variable. and DO not continue with the script.

Placing a variable like this will prevent you from cast the damage too often,

Thanks man! Helped me a lot! Thank you very much.