Damage Event is not triggering

so I got the topdown example with a few modifications but that shouldn’t be important for this issue.

Right before that I am calling the “Apply Damage” node to deal damage to that character. However the “Event Any Damage” will not receive anything.

I have for debug purposes a “Print String” behind my “Any Damage” event which gets never called.

Now the first assumption would be that I am not calling the right damaged actor. However I’m not even using the “overlapped” actor but rather one I provide when spawning the projectile. If I destroy that target actor instead of the projectile that character standing around gets destroyed as one would expect.

Here a few pictures about the setup I got 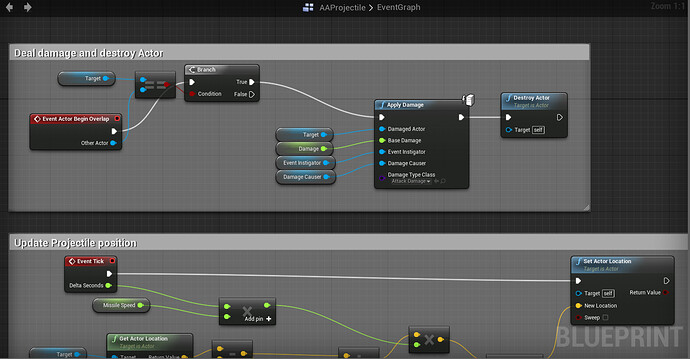 The actor class which gets hit (I previously used the parent class to handle this… well that wasn’t the issue either).

Yes the parent call is disconnected right now as I only want to get the input at all before debugging anything else. The “PrintString” should work though which it isn’t. 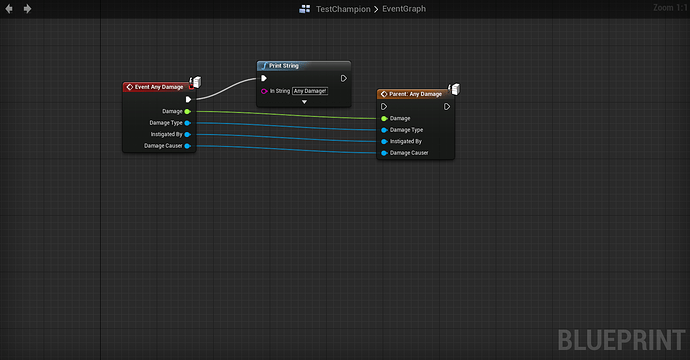 And last but not least the function which gets called when the character should autoattack (this works as well… at least it gets called. If there is an error I overlook it).

Outside of this picture is only a bit of return logic and the condition which works as it does fire the “AA!” Print String and fires a projectile.

Can I have any answer?

Is it a bug and I just have to wait a version?

I was able to have the “Any Damage” node fire off. In saying that I have a question for you. Could you run a print string off your damage variable to make sure that it is not zero? If your damage variable is producing no damage it will not fire off the “Any Damage” node. For a simple test you could try hard coding damage in to make sure that this is not the issue. Please let me know if this helps.

Wow, I spent like an hour trying to figure out why the damage event wasn’t firing off, and this was it! Thanks!

Just here to say thanks. How did something so simple become so invisible… maybe nice feature request to let the Event any damage still fire even if the damage is 0 ?

I just ran into this myself and was wondering if anyone else did as well. Glad I’m not alone. Calling damage with a base damage of ‘0’ makes sense for games that do not revolve around health points. I’m all for having the OnAnyDamage event always fire when ApplyDamage is called.