Alright guys, so this seems to be the 2nd time ive ran into issues that i can’t find, I seem to be doing everything just how people have said on this and my previous mod, i gave up on my previous mod as it just wouldn’t work. Alright so this one is just a simple item stacking mod for resources. ( I know there are others out there but they don’t get updated and cause errors on our server). Below are the steps i have taken and still, no changes in game, any help is much appreciated!

Copied all the necessary files over.

Assigned custom PrimalGameDate to the level 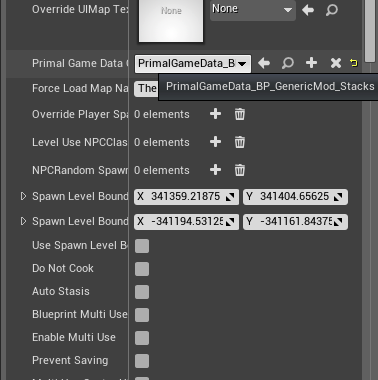 After all this, still no change in game, any help would be amazing thanks guys!

PS don’t know if i needed to copy over HarvestComponent_Wood, but i did anyways and renamed it to my own. Tried it without this and with, no change. Everything is referenced correctly as well.

Instead go to the “Remap Items” option in the PrimalGameData and remap them instead of just changing. That should fix it.

Thanks a ton bud! That seemed to of been it!

Does anyone know what is causing charcoal to stack into stacks of 1? I’m interested to know the answer also.

You need to redo the engrams structures that use your new resources as fuel so for campfire, you have to edit campfire to spit out the modded charcoal instead and then remap the engrams so when people learn the campfire engram, they’re learning it for your structure instead of vanilla structure. Took me a while to figure this out myself. I believe the blueprints you’ll need are the PrimalItem for the campfire, the Engram for the campfire, and the PrimalItemInventory (I believe that’s what its called but I don’t know for certain without looking in the dev kit).