I wanted to have fog in my level which only travels along the floor and is about 20-30 cm’s high.
I tried looking at the ambient fog volumes available which puts fog on the entire level, which is not the desired effect.

Would I have to make a custom particle system in order to achieve such an effect? If you can’t quite imagine what I am looking for, here is a video showing off the kind of fog I want to produce:

Now a second question would be, can you make the fog interactive? I’d like to, say, drop a box on top of the fog and the fog will go around the box because of air pressure, stay low because of gravity/mass/physics, disperse, relocate and act like you would expect real fog to do.

And how would I go about doing this? I am very new to particle systems in general and the things I have produced so far are…well lets just say less than desirable

Thank you for your question. You can create a Collision module in your particle to set the physics properties of a CPU particle. You can set mass, max collisions, dampening, and delay. A good smoke example can be found in the Content Examples’ Effects map and that can give you an idea for how to make your fog have a “rolling” effect. This may be somewhat heavy, but it will give you something close to your desired effect.

Please let me now if there is anything else I can assist you with.

Thanks for the answer. I will have a look. I am very new to particle systems, so I hope I can tweak it to my liking…

Are we allowed to use any of these effects for production or would we have to come up with our own? Personally I would think that we could use them since at one point or another we would eventually hit the same effect perfectly.

Just asking as I’d like to use some of these and tweak them to my liking. Hopefully get the effect I seek above.

Epic has released those projects and assets for Rocketeers to use as they like. So, go right ahead and have fun! 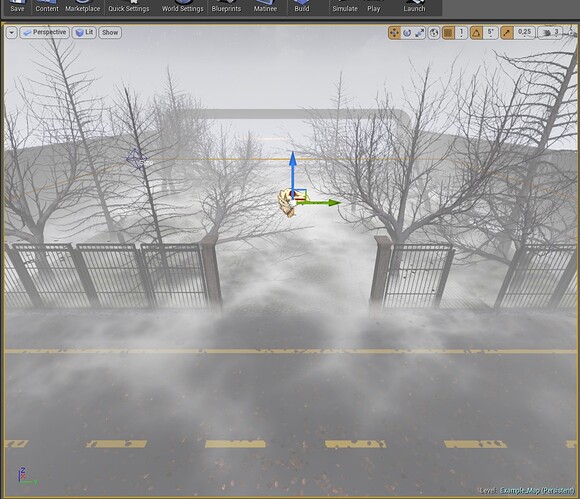 The BluePrint_FogSheet (90° rotated in X-Axxis) is an option for ground Fog as you can see. Not the most beautiful way, but a simple one.

This is a question from the beta version of the engine. We are marking this answered for tracking purposes. If you are experiencing an issue similar to this please post a new question.