Hello, as i speak i have VS 2019 and UE4.sln opened, now i will prepare to compile but before i wanted to ask that how to slim down build so i only build bare minimum without any other platform or ancient win32 and without plugins i do not want. Should i just delete them from list? 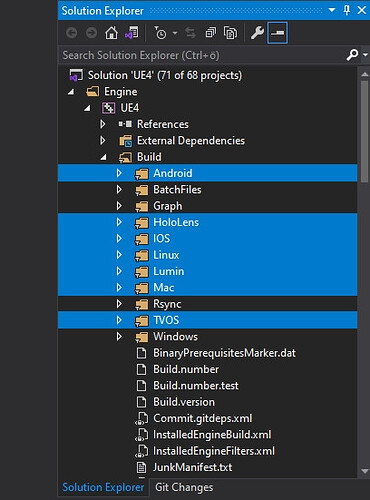 use windows explore for deleting plugins and modules. After removing something check using console/cmd if there is any error. Run from console GenerateProjectFiles.sh or GenerateProjectFiles.command base on the os(linux is better for this). Also you might have to edit some ini files and headers based on the plugins / modules.

I have seen the engine in ‘bare minimum’ and it is not worth the effort. If it is about performace, expect no performace difference. If it about saving space then with removing 97% of the plugins you will save a maximum of 15 gb. If it is about crash it will still persist. (some crash can be avoided by disabling experimental and beta plugins from the plugins browser istself).

It took 3 programmers a month to remove plugins and engine modules and integrate custom propietery plugins/modules with ‘unreal stl’ into the editor and engine runtime.

Thanks for answer, but i wanted to avoid unnecessary plugins and win on compile time & download size primarily. I hope Unreal 5 will be little bit better in this area. Currently i compiled Engine with success but it took 45 to 60 minutes at least. There are lot of plugins i would like to easily exclude in future if building whole engine.

If you follow the method that I said in the first paragraph then you can slim down many plugins. If you take 60 minutes to compile now it will save you 5 minutes from that and save ~15 gb. Download size can’t be reduced in the first run.
Unreal 4 is already fully modular. Also remember that the engine is constantly updated. So you will have to write patched and scripts to again perform your custimization. But it’s just that only advanced indie teams and studios can waste time on this.

Lets hope that in ue5 they will provide an option to download with minimum plugins in the precompiled version of the engine.