If I want to create a game like Gradius V: a game that the level moves from right to left. How can I do to move the background (or level)?

Yes, I know. I have no idea about this. This is why I say: “move the background”. But, as player, this is what I see.

How can I do it (move the level or background)?

I think that there will be a static camera and the level will be moving from right to left. Or maybe the camera will be attached to the space ship and that is, I don’t have to do anything special.

Move the spaceship through the level, camera goes on spaceship, profit.

I would think you would need to have the camera move itself (separate from the player) on the Y+ at a CERTAIN SPEED, set up a cube (set to hidden in game) and place it far left (inside camera BP), that way it will “drag” the ship when / if player is against it, I guess conversely you also need one far right to prevent going too far right, heck then I guess also up and down too lol, a boundary zone of sorts.

When the end of level is reached and or enter miniboss fight, set a branch with a boolean variable to STOP your camera advancing and force the player to move only in the on screen zone.

You are not alone, I have been asking many questions myself lately about camera actors.

Here is something that might be a start for you for this.

Third person template, delete all but the floor and scale it to make little islands (see video below) or blocks for player to jump on, make a blueprint (actor), go into it - add a camera - go head and drag and drop it over scene root to make it the new scene root, then with it still selected add a cube so it will be a child, scale and size and place it as you desire. 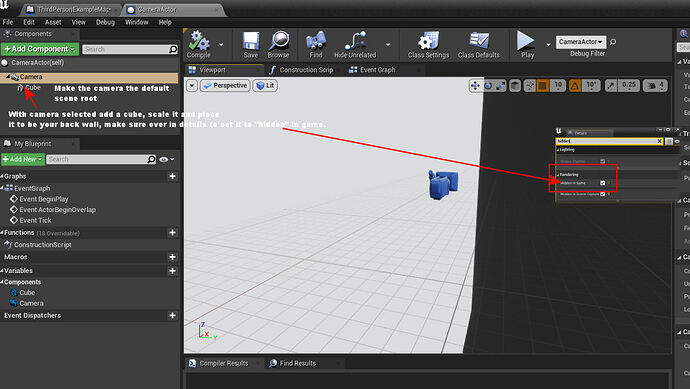 Here is the level blueprint, the two highlighted places is how you can set “speed” of the camera scroll.

Wow, that’s amazing. Thanks a lot for your answer, it will help me a lot.

Wow, thank you. This is what I need, I template to start with.

Here is the video, you can see the effect when the invisible wall smites the player from behind it quickly places him ahead in steps, I wonder how to make that wall just smoothly scrape the player forward. Hopefully someone knows why that is doing that and how to fix it.

Yw, glad to help, you can watch that video I just uploaded and see how I layed out the stuff in the world.

Bump, any ideas how to fix that issue with that wall instantly stepping the player and not smoothly pushing him forward?