Hey Guys,
im creating a Main Menu right now following by this Tutorial (https://docs.unrealengine.com/latest/INT/Engine/UMG/QuickStart/3/index.html), but somehow it doesnt work. Every time i press the Option Button the Menu simply disappears, in addition the game is moving in the back of it , that means that i am able to shoot while im in the menu. I already canceled all my steps that i have done and retryed it but i got still the same problem.
I hope some of you might be able to help me.
Greetings

Have you set the options buttons to hidden? -> like in step 14

Alright Problem one is solved

Alright Problem one is solved

They are on the same Map but it still doesnt work somehow … i tryed it on the FirstExampleMap but still no reaction. Well i got one reaction. When i press play once i cant move my mouse out of the testing area.
Could it possible be that i got a mistake in my blueprint: 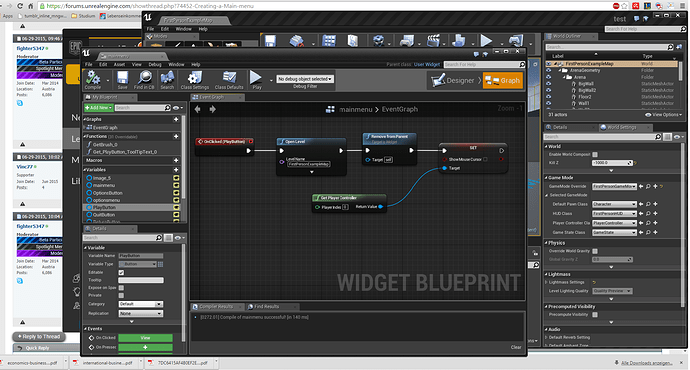 Well I tryed also that tutorial: Unreal Engine 4 Tutorial - Main Menu with Start / Load Level + Exit Game - YouTube but i got still the same problem … Is it maybe a bug?

Hello! About this tutorial there was a step that was omitted. At the start of the tutorial you were told to create a Level with the name “Main”, which is going to be empty. In this empty level open the level blueprint and continue with steps 13 to 15, not in the “FirstPersonExampleMap”. If you did steps 13-15 in the "FirstPersonExampleMap delete them as the main menu will persist. I hope it helped!