Is it possible to use the third person character model to make a first person player? If not what do I need to do to my model that I have setup for a 3rd person game to make it useable in the first person spot. When I take all but the arms and hands away( and yes the respected bones for these two locations is still in tack) and then try to link the default first person player skeleton with my models skeleton I keep getting arms and hands that look like they belong in Kingdom Hearts or something being made by Tim Burton. Any help here would be great. Also I am looking to create a minimap based on a 2d image like what you see in WoW or FF14 and not a 3d map like some of the tutorials floating around the forums have. There is one forum post that talks about panning an image as the character moves but nothing about how to do it. Also Fall damage is a pain and I can not get it to work. I know I need to make it to where the further you fall the more damage you take but I can’t get it setup to run properly. Any help on these items would be great.

I will write a small tutorial on all the stuff in your post ASAP. Will post when I’ve written it for you

Thank you. I really appreciate it.

Just following up on this thread since I needed information creating a 2d image map. There’s an example of what I wanted: - YouTube

The uploader kinda shows how he did it but I’m still a little lost as to how to get that set up.

Below is an image of my fall damage calculations. Ignore the Current Health portion as I have a working HP system in the game I am working on. This system works great except for when I am on like a hill ramp and I go to walk down it then I take like 20-40 points of damage out of 100 points total and that isn’t what I am wanting. Help here would be much appreciated.

Below is an image of my fall damage calculations. Ignore the Current Health portion as I have a working HP system in the game I am working on. This system works great except for when I am on like a hill ramp and I go to walk down it then I take like 20-40 points of damage out of 100 points total and that isn’t what I am wanting. Help here would be much appreciated.

Fairly easy fix: Break your velocity vector and only take the Z value. All you’re looking for is fall damage right? If the player runs against a wall and falls a bit he should not receive additional damage for his forward movement… so just remove it.
Z velocity is equal to height change of your character (well the speed of it… I hope you get my point). If you only use that for your calculations it should (if you’re only falling a bit like that) only deal very very little damage.

On top of that you might want to add a lower limit. Like you can only receive damage if it’d be above 10 so you’re not accumulating very small amounts of damage which stack up to a serious amount over time.

Ok that should work I will give that a try Thank you very much. I was kind of getting tired of un even ramps on terrains and taking fall damage because I would fall like 2 ft off a small edge.

I am still seeking a 2d minimap setup for Unreal Engine 4.6.1. I have gone to several different sites but nothing is telling me or helping me to figure out what the heck I am suppose to be doing here. http://www.reddit.com/r/unrealengine/comments/2n6wjm/how_to_create_a_2d_mini_map_using_ue45_not_the/ is the site I am at the most and have gotten the furthest with. It talks of panning based on character location and to divide a value by another value but where the heck do you put that value in the material editor and how do you dictate this value on a map/texture that isn’t to the power of two?

I’m trying to do the same thing. This is how I went.
I used the First person Example map, but you can use / create your own Blueprints. 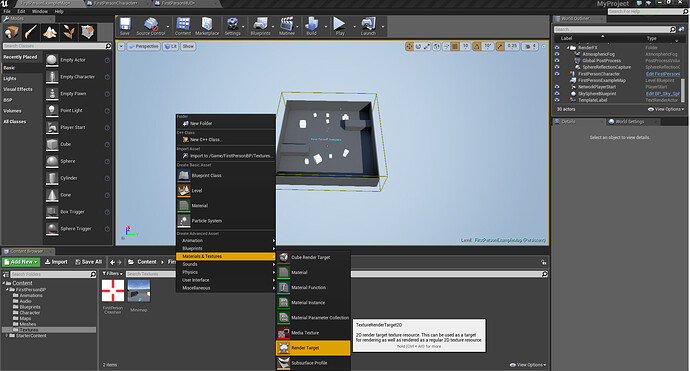 Now I need to find a camera. In the character Blueprint, I create one and put it above the player. I assign a SceneCaptureComponent2D to it.
In the details section, I set the texture target to be the Minimap render target texture.

Finally, we need to put the texture in the game as part of the HUD. I just add another draw texture action to the HUD BP and set the texture attribute to reference the render target texture.

but does this make the map 2d or still 3d in a 2d plane? As of right now I have a mini map but it isn’t quiet how I want it. I will upload an image of what I have atm and what I would prefer to use as my minimap. Well the upload isn’t working again for me so I will upload later but there is a tutorial out of how to make the 3d map on a 2d plane.

So what you want is a SceneCapture2D which is orthographic, right?

Yes that seems like it would be a great solution but I am not paying for something that should be avaible knowledge sadly. I mean if I had to I had to but I have minimap in the game atm I just don’t care for the whole 3d look on a 2d plane. Also would your minimap system work if the map isn’t squared off? My level is retangular

“Should be available knowledge”? It’s way too complex to create such a minimap to put this into anything like a tutorial.

I have the feeling that a rectangle will fit into a square if the square is big enough, so yes of course this would work :rolleyes:

I don’t want to put a rectangle into a square because I don’t want sides of the map showing up that aren’t to be shown though I suppose I could just do dead space areas on the map like what Final Fantasy 14 and WoW do. As for complex, yes it is probably comlpex as heck but isn’t that up to the person using it weither it is to complex for them or not? Anyway, is this up on the marketplace for purchase yet if I was to get interested in doing this method?

My Mini Map is not yet purchasable, but it will most likely be on the marketplace in some weeks.